Uncertainty and Cherrypicking in the Colvert Doping Case 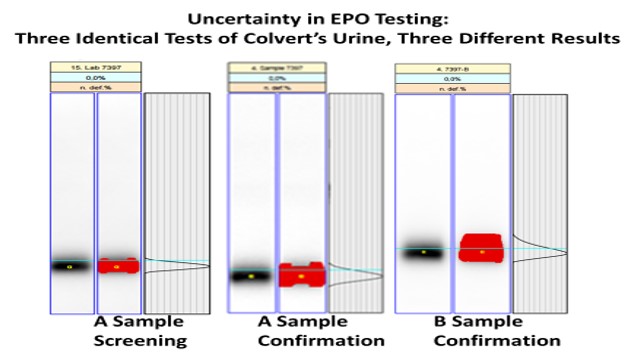 The figure above shows results from three identical tests (SAR-PAGE) applied to the same batch of urine, in the doping case of Steven Colvert.

Yesterday, I was able to deduce that the WAADs response to Lab Times used the middle panel to make an argument in support of his conviction in response to the recent Lab Times critique. However, the WADA experts who testified against Colvert did not use or refer to that middle panel in their testimony, but instead focused on the Screening Test which appears as the left panel above. The panel on the right is the SAR-PAGE result from the B sample, that is the second batch of urine from Colvert's drug test sample.

Here is what these panels show: On the right side of each panel is a sideways bell-shaped curve, which reflects the concentration of EPO in the sample. The blue line is a threshold value, above which indicates the presence of synthetic EPO, that is, doping. If the bell-shaped curve extends above that blue line, then it is an indicator of the subject having doped.

Much of the discussion in the disciplinary hearing on Colvert's case focused on the Screening Test. There is almost none of the bell-shaped curve above that blue line, which led a WADA expert to explain that one has to be an expert to be able to see it as evidence of doping.

In contrast, the WAADs response to Lab Times published yesterday focused instead on the middle panel, which indicates a more substantial amount of synthetic EPO above the blue line. Note that the SAR-PAGE results are a subset of the full scientific evidence of this case.

Us non-expects can take away a few key conclusions here:


In the context of uncertain and contradictory results, due process for an athlete should require a rather high standard of proof for a conviction to occur. In Colvert's case, the A Sample Screening Test was judged sufficient to reverse the burden of proof such that he had to prove himself innocent.

However, even today neither WADA experts among themselves nor independent experts are in agreement over what the test results indicate.

It is true that Colvert has not proven himself innocent. That is probably impossible, as the original samples have all been destroyed. At the same time, it seems clear that the evidence does not prove Colvert guilty either.
Posted by Roger Pielke, Jr. at 6:56 AM