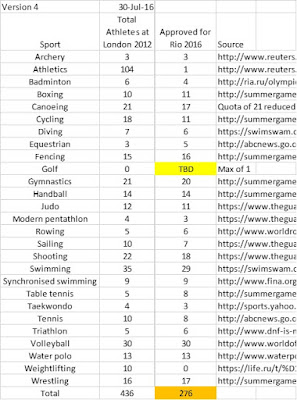 Above is my final tabulation of Russian athletes participating in the 2016 Rio Olympics. Here is a summary:

Bottom line: After all of the confusion and drama, Russia still has most of its athletes participating in almost all sports. Track and field and weightlifting are the notable exceptions. For TV viewers around the world - outside Russia of course - the Olympics will look much like they always have and the Russian doping episode will be a footnote.
Posted by Roger Pielke, Jr. at 6:21 AM 0 comments 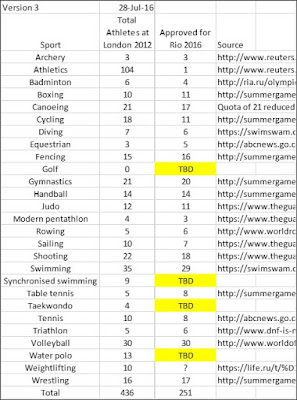 Here is a scorecard I've been Tweeting the past two days to keep track of the number of Russian athletes who will be in Rio.

Bottom line as of today:

Reuters is reporting via Russian media that >250 Russian athletes have already been approved.

The AP has a similar tracker here, reporting that 208 Russians have been cleared.

Russian media has reported the Weightlifting has been banned, though the IWF has not announced this, so they remain in the unknown category.
Posted by Roger Pielke, Jr. at 3:34 PM 0 comments

Guest Post: A Scorecard for Implementation of Recommendations of the UCI CIRC Report

[RP: This is a guest post by Steve Maxwell and Joel Harris. A longer version of this article was originally published at The Outer Line.]

Brian Cookson took over the UCI Presidency in late 2013, heralding a new direction in pro cycling, and proposing sweeping changes in the way that the sport was managed and overseen.  One of the key initiatives in Cookson’s early agenda was to create the Cycling Independent Reform Commission (CIRC) – a panel of independent experts to review the history of cycling, and make recommendations for cleaning up and better managing the sport in the future.

In February of 2015 the CIRC issued a 227-page report, which dealt primarily with a historical review and analysis of doping practices in the sport.  One of the three key objectives of the CIRC process — and the stated “main purpose” of the report — was “to provide recommendations for the future.”   In terms of this task, where the Commission had the greatest opportunity for positive impact, the report was unfortunately somewhat light.   The recommendations cover a mere 11 pages at the end of the report, and while some of them raised new and specific ideas, many were either self-evident, had already been proposed in far more detail elsewhere, or were overly broad and generalized.  Nevertheless, it is important to dig into these recommendations in more detail, and gauge where the sport is today.

There were 34 different individual recommendations in all, some of which were very broad and sweeping, while others were quite narrow and specific.  Some were immediate in nature, while others were much more generalized ideas that could only be gradually put in place over a number of years.

To simplify an initial assessment of progress, we focused primarily on several “Yes/No” and “Objectively Measurable” recommendations, which are relatively straight-forward and unambiguous.  We tracked public statements over the past three years, and the UCI also provided detailed responses to our questions about the status of individual recommendations. Our assessment and description of the progress to date on twelve specific recommendations is summarized in the following Table [RP: click to enlarge], and key highlights are discussed in more detail below.

In terms of the key anti-doping focus of the Report, the creation of a new “intelligence officer” and desk function (within the ostensibly independent Cycling Anti-Doping Foundation – CADF) is reportedly beginning to help in terms of the collection, analysis and coordination of anti-doping information from different sources.  The CADF also established a “whistleblower hotline” email address.   Night-time testing of suspected dopers has been made more universal.  New sharing and collective agreements have been signed with 12 different NADOs.  The UCI has generally ended conflicts with WADA and certain NADOs that simmered under Pat McQuaid’s reign.

The UCI has made improvements in the way it manages and executes the Athlete Biological Passport program.  The process and paperwork have been streamlined, and staff has been added to speed up the administrative aspects of the program.    This in turn has significantly reduced the number of cases that have been referred on to the Court of Arbitration for Sport (CAS).

There have reportedly been significant transparency improvements in the UCI’s electoral process, and the adoption of term limits for the President.  A few weeks ago, the UCI announced significant revisions to its Code of Ethics. A much larger number of individuals, including UCI staff, consultants and event organizers will reportedly be covered by the terms of this new set of guidelines. In addition, the UCI suggests that the Ethics Commission will increasingly be staffed by expert professionals from outside of the sport.

Significant progress has also been made in the controversial area of therapeutic usage exemptions (TUE).  All applications must now be approved by three independent experts, and the decision must be unanimous.  This stricter process is cutting down on unwarranted TUE applications – in a critical statistic, the UCI reports that TUEs actually granted have fallen from 239 in 2009 to just 24 in 2014 and only 13 in 2015.

In terms of other forms of cheating within the sport, the UCI has cranked up its focus on so-called “motorized doping” during the past six months.

Progress is less certain in other key areas.  For example, the Report recommended that the UCI should strive to help facilitate the creation of a stronger riders union.  Although the UCI has “reconstituted” the largely dormant UCI Athletes’ Commission, its specific role and future impact is unclear.  It’s clear that a stronger voice for the riders is a critical issue – and one which will help shape the future of the sport.

In summary, progress is being made on many of the more straightforward CIRC recommendations; Brian Cookson and his team should be commended for their accomplishments to date.  Indeed, compared to the problems being experienced by other international sports like soccer, track and field, and tennis, an argument can be made that cycling is ahead of the curve, and setting an example for how a troubled international sport can act to get its house in better order.

At the same time, there is a long road ahead.  While almost all of the CIRC recommendations were well-intended, many of them were maddeningly vague or simplistic – such as the calls for the UCI to “become more accountable” or to “improve the financial stability of the sport.” And there are numerous other challenges – above and beyond the CIRC recommendations – which are also crying out for more attention and focus.   Rider safety issues are currently at the forefront of concern.  The number of WorldTour teams is contracting, key sponsors are leaving the sport without replacement, races are falling off the calendar.  Even with the procedural and protocol improvements, many people believe that anti-doping efforts will not be truly independent as long as the CADF is housed within the UCI’s offices.

We sympathize with the enormity of the challenges faced by the UCI, and acknowledge the complexity of initiating and implementing solutions in road racing while simultaneously overseeing 7 other disciplines.  We also acknowledge the overwhelming power and control exerted over pro cycling by ASO – and the consequent constraints which this also places on the UCI’s ability to institute real change or embark upon new directions which may be optimal for the overall sport in the long-term.  (However, as we have discussed in detail elsewhere, this is a topic deserving of its own separate analysis because of the pervasive shadow it casts across all of cycling.)  But despite vague UCI proclamations about improvement in governance and economic conditions, progress remains frustratingly slow in many broader but critical areas.  We all want to see progress towards addressing these broader challenges, but until they can be broken down into more specific, bite-size and actionable steps, it will be difficult to either make or verify actual progress.  (Several specific ideas for these types of more tactical and actionable steps are discussed here and here.)

As Cookson approaches the end of his third year in power, the sport is in a better place and progress is being made – but this is no time to rest on laurels, and the UCI must be careful not to gloss over its numerous broader challenges.   While it may be easier and often tempting to talk in generalities and platitudes – and to employ the now well-worn “evolution, not revolution” posture – only with a focus on more specific tactical steps and more effective progress metrics can the UCI continue moving the sport forward.
Posted by Roger Pielke, Jr. at 1:08 PM 0 comments