Submission to European Athletics on Rewriting the Record Books

European Athletics has proposed a new set of criteria for the validation of world records in the various disciplines of athletics (track and field). A world record will be recognized by European and world officials if and only if it meets the following three criteria:
Because the IAAF began storing blood and urine samples in 2005, many have interpreted the new policy to mean that all records established before 2005 would be erased.

I wish to applaud European Athletics for initiating an important discussion about the credibility of world records in athletics. Here I offer a critique of the proposed new criteria. I argue that an evidence-based understanding of the problem being solved is needed before seeking to implement solutions. In this case, there exists a lack of evidence in support of the efficacy of proposed solutions, most notably evidence to suggest that athletics completions take place on a solid foundation of anti-doping regulation.

So what is the problem to be addressed, anyway?

European Athletics offers three “main reasons” why action is now needed (PDF):
Let’s take a closer look at these reasons for action one at a time:

If there is one constant in the circumstances under which elite athletics take place, it is change. There is no stasis – in the rules that govern competition, in the technology used in sport or in the efforts to contravene and enforce the rules.

For instance, the IAAF recently approved new rules governing shoe technology, presumably in response to the new Nike shoes that allegedly provide Nike athletes of today an advantage that other athletes and all past athletes did not have.  The IAAF rulebook is a living document and athletes compete under the rulebook in place when they compete.

The elephant in the room is a presupposition that records set prior to some arbitrary date are more “credible” than those set afterwards. This is a testable proposition, and the subject of the next section.

There is no doubt that some records of the past were achieved by athletes who broke rules that prohibited doping or, if rules were not broken, used the assistance of substances that were subsequently banned. Strong circumstantial evidence for this conclusion can be seen in the following graph created by the Financial Times. 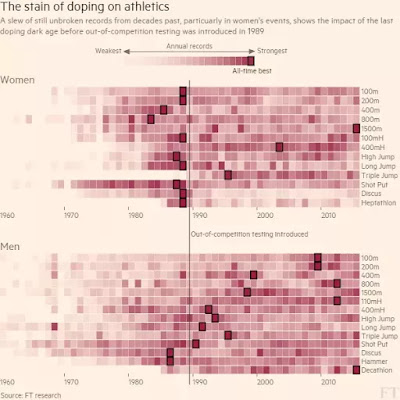 If past records were achieved through the use of prohibited substances then the historical record of record-setting suggests that 1989 offers a clear point of demarcation for women’s events, but that no such clear date exists for men.

Another approach to establishing credibility would be to demonstrate with evidence that the prevalence of doping among elite athletes was significantly higher before some date, after which records could be considered less tainted than those which came before.

Unfortunately, data that would provide evidence for trends in the prevalence of doping among elite athletes has not been collected.  Data that is available from rigorous studies suggest that doping prevalence among elite athletes in recent years in athletics could exceed more than 40% of all athletes (see de Hon et al. 2014 and Ulrich et al, in press).

In the absence of data on doping prevalence, efforts to establish “credibility” risk being seen more as window dressing and public relations, rather than evidence-based, rigorous and trustworthy. Credibility will best come from evidence, not exhortation.

Similarly, it is not clear that public trust has been lost or even if was ever there in the first place. As one study concludes: “Despite the vast amount of literature available on doping in sports, little is known about how the general public actually thinks about doping.”

Further, it is not clear if public trust in the integrity of sport is affected more by evidence that athletes break rules or revelations of scandals among athletic administrators.  As suggested above with respect to doping prevalence, efforts to influence public opinion related to athletics records and, more generally, athletics integrity, will benefit from actual evidence of public opinion, what shapes it and why it matters for sponsors, fans and athletes.

A decision to reset the record book related to athletics can be justified for any number of reasons. However, if the goal of such a clearing of the slate is to create more of a level playing field for verifying records over time, then the proposed approach by European Athletics remains premature, for reasons argued above.

An alternative approach would be to first address issues of integrity in sport by improving WADA and anti-doping regulation. Central to such improvement is to place anti-doping efforts on a more solid foundation of evidence and science.  In the absence of such improvements to anti-doping regulation, efforts to rewrite the record book will be undercut by the very first, inevitable scandal to occur in the coming years. Doping remains prevalent in sport, and creating a new record book won’t change that fact.

If and when anti-doping regulation is placed on a more solid foundation, then the time might be right to discuss a new era of performance and achievement.  Until then we should let past records stand as an indication that the work of anti-doping reform remains to fully be done.
Posted by Roger Pielke, Jr. at 8:06 AM 0 comments 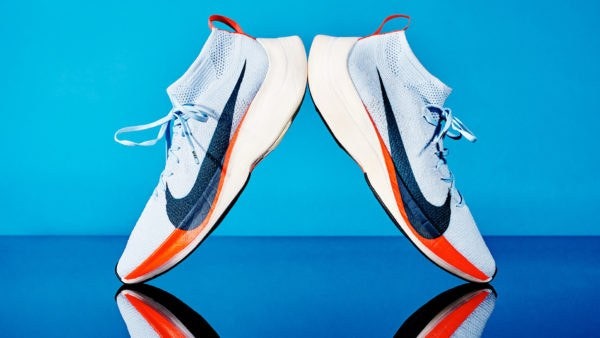 As you might expect, the IAAF has rules in place governing shoes used in athletic competition. In The Edge I explain that one of the first rules for shoes was put in place in the 1950s after a clever Russian high jumper was launching himself off of platform shoes.

The most recent changes to the rules can be seen in the figure below, screenshotted from the recently released amendments to the 2016-2017 IAAF competition rules. 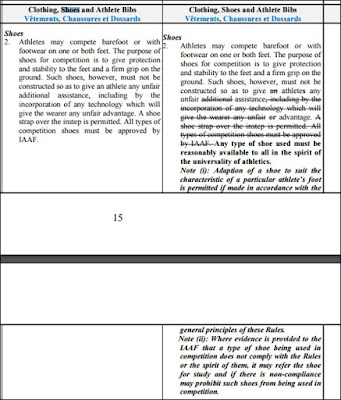 The new rules are likely introduced in the context of controversy and discussion of a new Nike shoe, designed to provide runners additional assistance. I discussed some of the issues associated with the new shoe technology in The Guardian earlier this month.

For instance, the previous version of the rules explained that shoes "must not be constructed so as to give an athlete any unfair additional assistance, including by the incorporation of any technology which will give the wearer and unfair advantage." The phrase "additional assistance" refers to additionality over running barefoot.

The new phrasing "must not be constructed so as to give an athletes any unfair additional assistance, including by the incorporation of any technology which will give the wearer any unfair or advantage."

It seems clear that the new language is crafted to eliminate controversy over the new Nike shoe because it removes the notion of "additional assistance"and the specific reference to shoe technology.

What then is "unfair assistance or advantage"?  It is undefined.

As I argued in The Guardian we can look to Rule 144 governing prosthetics for insight to what "unfair" actually means in an IAAF context. There I explained:

In 2015 the IAAF quietly changed the requirement that it had to show an “advantage” provided by technology in order to ban an athlete. The rule change meant that the burden of proof was now on the athlete to show that the use of technology would “not provide him with an overall competitive advantage over an athlete not using such an aid” . . .

Thus, if we apply the same standards to Nike’s fancy new shoes that the IAAF applies to prosthetic limbs, then the shoes clearly are illegal under IAAF rules. They provide an overall competitive advantage over athletes not using the shoes. That is both what they were designed to do and also what is indicated by testing by my colleagues here at the University of Colorado. Not all athletes can use the shoes, because not all are sponsored by Nike. For the shoes to be allowed, proof would have to be provided that they do not provide an advantage.

The new IAAF are a CAS case waiting to be heard. I expect that it will not be long before an excluded Paralympian takes this up. Watch this space.
Posted by Roger Pielke, Jr. at 12:32 PM 0 comments