Some Things I did not Blog on This Week

Here are a few items that caught my eye this week:

It's a Drag: Those USA Skating Suits 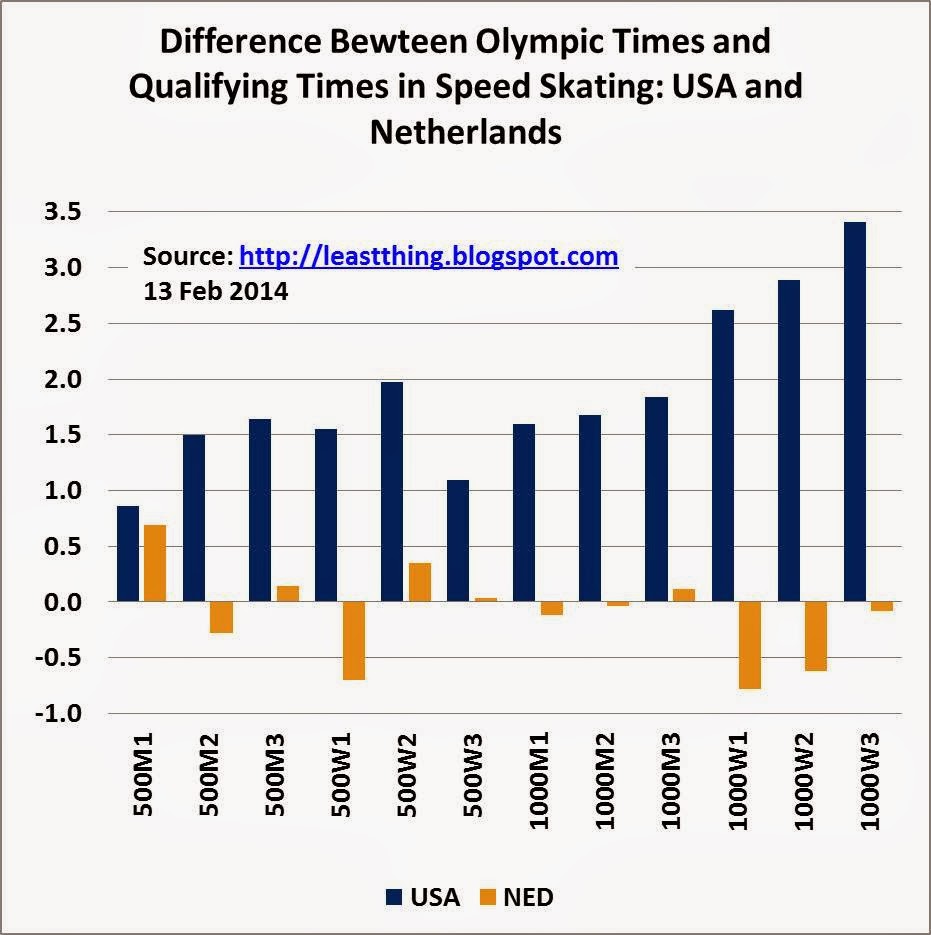 The Wall Street Journal reported earlier today that the disappointing results of the US speed skaters in the Sochi Olympics may originate in the hi-tech suits that the athletes are wearing. This post takes a look at some data to see what it might tell us about the effects of the suits.

The suits are being worn for the first time in Sochi, but that is not the only variable we have to think about. Speed skating takes place at different tracks in different places (and elevations). Athletes have better and worse days and aim to peak at important events (like the Olympics) and so on. So disentangling the effects of the new suits in performance data is not an exact science. But the data can tell us something.

As a starting point, the graph above shows the difference in times for the top 3 finishers in the 500M and 1000M Sochi Olympics long track skating events for both men and women, for the USA and Netherlands. (Note that the 500M times are actually the sum of two 500M races.) The data comes from the excellent speedskatingresults.com and Sochi 2014.

Looking at the graph above you might think that there is good evidence that the suits have slowed down the USA skaters. But it is not so simple. The USA qualifications took place in Salt lake City which is at altitude, and has a notoriously fast track which means faster times.

The graph below shows the same analysis, but compares the difference between times at Sochi and a December, 2013 event in Berlin, the Essent ISU World Cup. Berlin and Sochi have comparable altitudes so that can be factored out. Note that 3 athletes who represented the USA in Sochi did not have relevant times in Berlin, so there are only 9 values shown here for the USA. 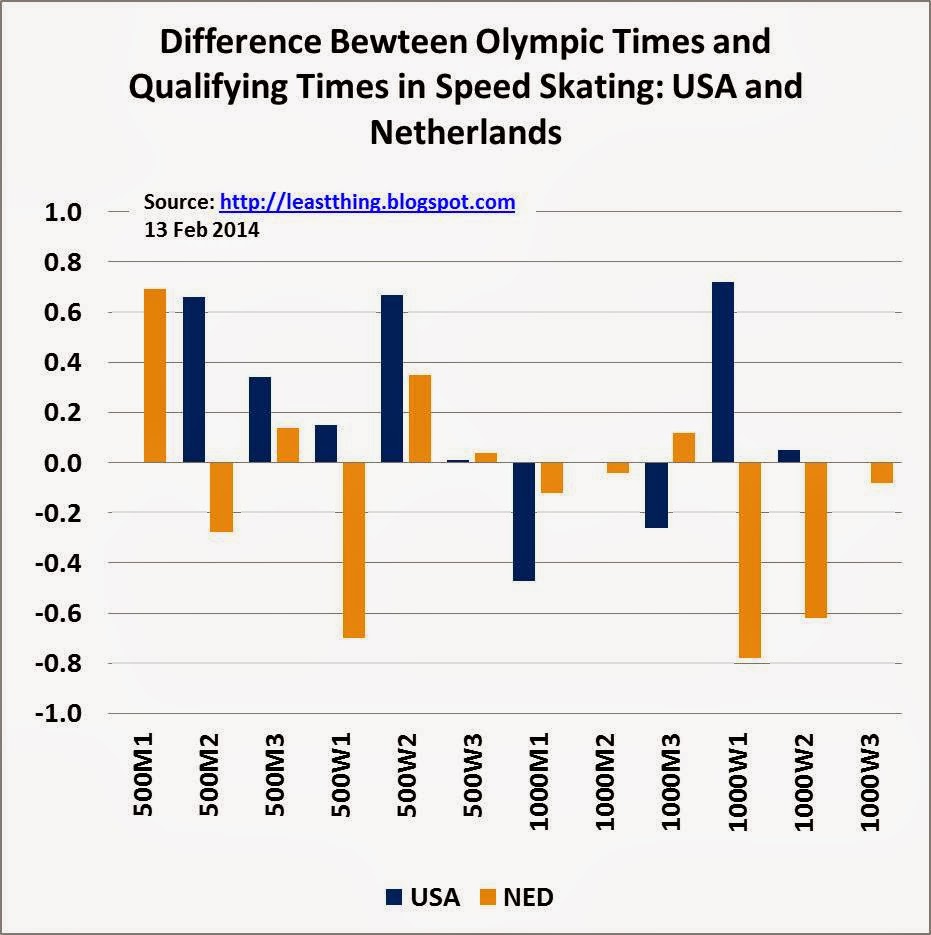 In a sport where hundredths of a second can mean the difference between winning and losing, clearly something is going on with Team USA. The suits in question have never before been worn in competition and were tested in a wind tunnel on mannequins, not actual people. Rolling out a fancy new innovation for the first time in competition is a big mistake, as was the testing in conditions that were not actually those identical to how the suit would be used. Regardless of the final judgments on the suits, that should be one big lesson from the skaters in Sochi.

What is clear from the data is that Team USA has -- in the 500M and 1000M so far -- under-performed itself. That is, given its past performance it has systematically done worse with respect to time, generally but not universally. Are the suits part of the problem? Is it the meals at the team dinners? Something else?

Perhaps more data from more events will paint a clearer picture, but the evidence collected here leads me to believe that the suits are a leading candidate for the under-performance. No doubt Team USA will get to the bottom of it.
Posted by Roger Pielke, Jr. at 4:34 PM 1 comments 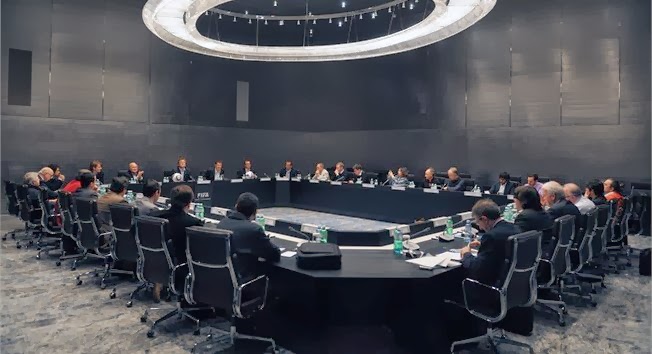 Now that FIFA is not paying bonuses to its ExCo it looks like it will have about $6.5 million extra dollars. I wonder if that means Blatter will get a raise. We won't know because FIFA does not release its salary information.
Posted by Roger Pielke, Jr. at 8:41 AM 0 comments

Students in ETHN 3104 -- The Governance of Sport -- were given their first big project today. The assignment, due in two weeks, is to come up with a policy recommendation in two different contexts.

The second topic focuses on the case of Caster Semenya, the South African sprinter, who was the subject of a gender controversy following the 2009 IAAF championships. The two groups with this topic are asked to develop a policy to govern participation in women's events under the Olympic movement.

Here is what the students are asked to deliver:

A. A <10-paper report on their policy.
B. An executive summary
C. A PowerPoint presentation
D. A 6-7 minute (no more, no less) presentation to the class

There are 2 groups under each topic and I explained to the class that we will collectively evaluate which group comes up with the better policy (and also, what it even means to say that one policy is "better" than another).

The initial readings for these projects are here and I told the students that they will want to go further in their own research. They are a smart and engaged bunch, and I am looking forward to what they come up with!
Posted by Roger Pielke, Jr. at 8:31 AM 0 comments

End of the Redskins?


I'm showing the short interview above in class today -- the topic for this week is The Sports Gene by David Epstein.
Posted by Roger Pielke, Jr. at 7:21 AM 0 comments 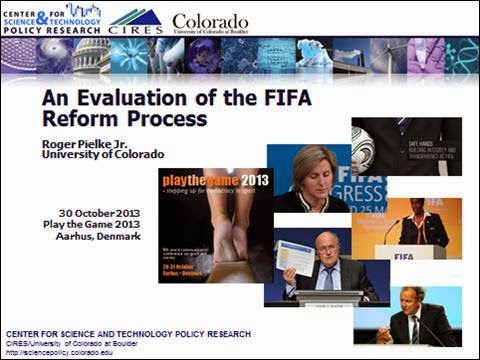 Anyone wishing a copy of the paper can email me: rpielkejr at gmail.
Posted by Roger Pielke, Jr. at 8:36 AM 0 comments