Guest Post: The "Arnie Effect" vs. The "Tiger Effect" on PGA Purses 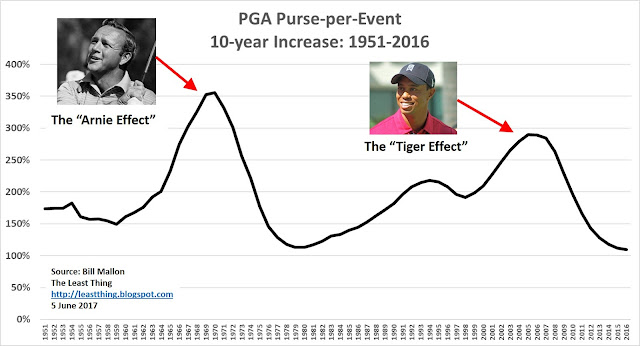 Roger Pielke has written of the “Tiger Effect,” in this case defining it as the increase in purses on the PGA Tour after Tiger’s ascension to the top. Roger and I had emails back and forth on this as I said I thought the “Arnie Effect” may have been just as large in the 1960s, if not bigger.

Frank Beard, leading money winner in 1969, once said that all pro golfers should give Arnold Palmer 25 cents out of every dollar they earned, because he had gotten at least that much for them. A disclaimer here – in the 1970s, I was one of those pro golfers who owed Arnie a part of my winnings, playing from 1975-79, and if you want to know how much purses are different now than then, in 1977 I was 96th on the money list, with just under $24,000 official earnings. In 2016, the 96th player on the PGA Tour money list (Brett Stegmaier) earned $1,086,714. (Note: I am not bitter.)

So, I decided to look at the stats on this to see how much effect Tiger and Arnie had on PGA Tour purses. I chose to look specifically at the 10-year period starting when they first became the leading players on the tour. For Arnie that was 1958, while for Tiger it was 1997.

In the accompanying table [displayed below this post], you can see the PGA Tour total purses and how much they won going back to 1938, the first year that was recorded, as well as the number of events held. Because total purses are dependent on the number of events (take a look at the war year 1943 when there were only 3 events), the next column lists the average purse per event, which is a better statistic to use. Finally, to effectively use the same dollar values, this number is corrected for inflation, listed in the 5th column from the left.

Also of note, there is no other 10-year era that approaches the effect that Arnie and Tiger had on PGA Tour purses. The closest thing to it comes in 1992-95 when the 10-year actual purse increase was up to 218.2%. What could explain this? If anything, this should probably be called the Deane Effect, in honor of Deane Beman, then the PGA Tour Commissioner. In the late 80’s and early 90’s Deane started building Tournament Player courses, popularizing stadium courses, most notably at TPC Sawgrass, home of The Players Championship. He deserves a lot of credit for starting the increase in PGA Tour purses that has continued, led by Tiger’s popularity, into the 21st Century.

So my original suspicion, that Arnold Palmer affected purses even more than Tiger Woods did, was somewhat correct, although the differences between the two eras were not that large – maxes of 325.7% vs. 284.2%. They both had profound, and close to equal effects on PGA Tour purses, but Arnie remains “The King.”