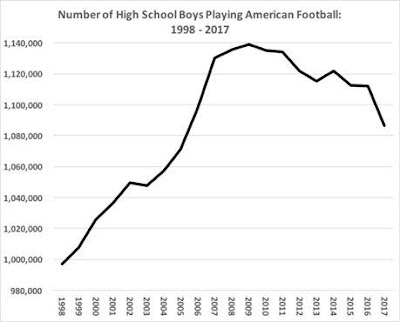 At Play the Game I have a new column up that asks and answers the question whether the US has hit "peak football"?

Here is how it starts:


Last month my son’s middle school principal announced that there was not enough interest among students for the school to form an (American) football team to compete in 8th grade interscholastic competition. On the one hand, this seemed notable, as playing youth football is a cherished American tradition and football is what Gregg Easterbrook has called the King of Sports. On the other hand, I live in Boulder, Colorado – an environmentally-friendly, health-conscious, exercise-crazy college town -- an American outlier in many respects.

So, to assess whether my son’s school is an oddity or part of a larger trend, I decided to look into the state of American football, and this essay reports what I’ve found.

Head over to read the rest. I welcome comments.
Posted by Roger Pielke, Jr. at 5:27 AM 0 comments

NASL and Jeffrey Kessler Take on US Soccer

The North American Soccer League has sued the U.S. Soccer Federation and the lead counsel for NASL is Jeffrey Kessler, a leading anti-trust lawyer often involved in sports litigation. The lawsuit itself can be found here and a nice overview here. I discussed some of the earlier tensions between NASL and MLS in a blog post 2 years ago, here.

I'll leave the matters of law to the lawyers, but in this post I offer some thoughts on the lawsuit in the context of the governance of US Soccer. The lawsuit reveals some broader problems in the governance of US Soccer, ones that I have discussed at various times in the past (e.g., here and here). These broader problems focus on, what else, money and the use of soccer organizations to cash in.

The NASL characterizes US Soccer, Major League Soccer, Soccer United Marketing and (to a lesser extent) the United Soccer League as inter-related parts of a "conspiracy" to protect the monopoly status of the MLS. The lawsuit explains:


"By promulgating a changing portfolio of so-called “Professional League Standards” and regulations to protect MLS, and now USL, from competition, the USSF enriches itself and protects MLS as the only top-tier Division I men’s professional soccer league located in the U.S. and Canada, immune from competition from new entrants and potential rival leagues even though the USSF is a private organization and has no legal authority to confer immunity from competition to anyone."

The basis for the lawsuit is NASL's interest in its survival as a league and ability to compete fairly against the MLS to provide professional soccer in the United States.

But more generally, what the NASL lawsuit describes is a money machine. US Soccer, MLS and SUM have created a highly opaque, financially interdependent set of institutions legitimized by FIFA that would appear to benefit not just the individual team investors in the MLS, but also other (largely unknown) owners of SUM and MLS. Some of these individuals may include USSF officials. As the lawsuit explains:


"Upon information and belief, SUM is controlled by MLS or by the owners of MLS. SUM has entered into commercial relationships with USSF that are designed to align the economic interests of the USSF to favor MLS and protect its monopoly position."


"103. The economic motivation for the USSF to use its Professional League Standards to maintain the MLS Division I monopoly, in concert with MLS, is evident from the series of commercial arrangements that the USSF entered into with MLS under which the USSF profits (notwithstanding its putative non-profit status) from the monopoly status it maintains for MLS. Most prominently, the USSF’s commercial rights have been pooled together and sold jointly with the commercial rights of MLS in “Soccer United Marketing” (“SUM”), a marketing company that, upon information and belief, is owned and controlled by MLS or its owners.

What kind of money are we talking about?  The NY Daily News provided some insight in a 2016 article, which discussed the role of MLS president Don Garber and USSF president Sunil Gulati in the context of the organizations' rarely discussed finances:


In the early 2000s, [Don] Garber and the owners wanted to get the fledgling MLS on television to build a fanbase and sponsor interest, but broadcasters weren’t interested — a lure would be required to entice them. When Garber noticed the U.S. broadcast rights to the 2002 and 2006 World Cups had not yet been picked up, he found his bait. The league acquired the potentially lucrative property and created SUM to serve as its business arm. SUM shopped the World Cup rights to television networks but with one condition: they also pick up MLS games, terms that ABC and ESPN ultimately accepted.

Through that kind of packaging and “one-stop shopping” for sponsors, SUM is able to pool revenues fairly quickly. By 2011, when SUM sold a 25% stake in the company to Providence Equity Partners, a private-equity investment firm, Major League Soccer’s “commercial arm” was estimated to be worth $600 million.

According to US Soccer president Sunil Gulati, SUM pays an annual guarantee to US Soccer — in 2004 it was $3.5 million; by 2014 it had grown to $8.25 million — in exchange for most sponsorship, television, licensing and royalty revenues. Not only does SUM benefit through financial remuneration, it allows it to package the gold-plated national team brand with other SUM properties — such as MLS — when selling rights to sponsors and broadcasters.

Once SUM reaches an undisclosed amount of profit on these commercial rights, it splits the rest with US Soccer, with 30% going to SUM. Financial statements ending in March 2015, the most recent available, show that SUM paid a total of $18.3 million to US Soccer. What is not indicated is how much of US Soccer’s potential revenue SUM retains. For example, of the eight-year, $720 million broadcast deal SUM recently inked for MLS and national team games, neither SUM nor US Soccer publicly discloses how much makes its way back to the federation. (Dan Courtemanche, senior spokesman for SUM and MLS, would not comment on business arrangements, citing SUM’s status as a private company. SUM president Kathy Carter declined to be interviewed, and Garber did not respond to interview requests.)

There is a lot in there (a lot of dollars too), so let me summarize:

There is more. According to the NY Post, MLS president Garber has a conflict of interest when it comes to SUM:

According to US Soccer, Garber recused himself from voting on its financial arrangement with SUM, standard protocol for someone who has interests with both parties.

It also appears that USSF president Sunil Gulati is a shareholder in SUM, because he reportedly also recuses himself from USSF discussions of SUM, based on what USSF told me in an interview for this article last year.

If that is the case then that would mean that both Garber and Gulati have a piece of the $600 million of equity (in 2011) represented by SUM. Just as interesting, some fraction of SUM's television rights packages were helped along by none other than the late Chuck Blazer, who was caught up in and helped to move along the US DOJ investigation into corruption among FIFA, CONCACAF and CONMEBOL officials.

The conflicted roles of Garber and Gulati quickly descend into a situation of endemic conflict of interest, as literally every decision made by US Soccer related to professional or international soccer has implications for the SUM bottom line. I discussed the problematic nature of US soccer's lack of a conflict of interest policy at some length at Soccernomics last year. Are there other US Soccer officials with similar conflicts? We don't know.

Back to the NASL lawsuit -- the desire for a monopoly position among US Soccer might not simply be a matter of the desire to promote the fortunes of the MLS at the expense of other leagues. It may also have something to do with the fact that the USSF, MLS and SUM have created a fantastically lucrative arrangement involving TV and other marketing rights, international friendlies and other matches, as well as a stranglehold on professional soccer in the United States.

The NASL lawsuit thus threatens to blow all of this wide open. Of the three organizations -- USSF, SUM and MLS -- the USSF is putatively a non-profit sports organization under US law. As such it is right to ask the organization to provide a much greater degree of transparency and to implement basic conflict of interest provisions.  It would also be appropriate to ask US Soccer to clearly separate from the for-profit enterprises in MLS and SUM. As things currently stand all that looks very unlikely.

The NASL lawsuit threatens the entire superstructure of US Soccer. That might be a good thing.