USADA has responded to the allegations that it failed to follow its own rules while entering into a contract with Floyd Mayweather and Manny Pacquiao to provide drug testing services. The dispute centers on whether USADA was acting properly in granting Mayweather a "therapeutic use exemption" for the use of an IV in advance of his fight with Pacquiao.

The contract that Mayweather and USADA entered into stipulated that USADA was to follow the rules that it has a mandate to follow, specifically those of WADA (The full contract is here in PDF). 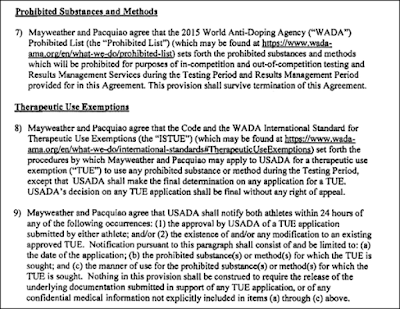 However, in USADA's response to allegations today it cited not the WADA policies referred to in its contract with Mayweather, but those of the Nevada State Athletic Commission:


Mr. Mayweather applied for and was granted a Therapeutic Use Exemption (TUE) by USADA for an IV infusion of saline and vitamins that was administered prior to his May 2 fight against Manny Pacquiao.  Mr. Mayweather’s use of the IV was not prohibited under the NSAC rules at that time and would not be a violation of the NSAC rules today.  Nonetheless, because Mr. Mayweather was voluntarily taking part in a USADA program, and therefore subject to the rules of the WADA Code, he took the additional step of applying for a TUE after the IV infusion was administered in order remain in compliance with the USADA program.

This makes no sense on several levels.

First, USADA is not governed by NSAC rules nor does it have any authority to implement the rules of NSAC.  Bob Bennett, executive director of the NSAC made this clear in the LA Times today;


"I have specifically articulated and memorialized to USADA that [NSAC] is the sole authority that can authorize a therapeutic-use exemption for a fighter in the state of Nevada."

USADA, somewhat bizarrely, is invoking rules of another organization as if they were its own. They are not.

Second, the logic makes no sense. If NSAC rules supersede those of WADA in this case, then there would be no cause for Mayweather to further apply for a TUE under the WADA Code. The WADA Code makes no exemptions for the State of Nevada or any place else. But Mayweather's contract with USADA makes no mention of deference to NSAC rules. Thus, what USADA is claiming makes no sense.

The bottom line is that USADA appears to be freelancing here. They signed a contract with Mayweather under which he agreed to comply with the WADA Code. Upon being found out not to have followed that Code, USADA after-the-fact claims that a different set of rules apply, those of the NSAC. But NSAC, rightly, explains that USADA has no jurisdiction and no authority when it comes to enforcing their rules. USADA is clearly in the wrong here.

It is a mess an an embarrassment for USADA. The easy solution here would be for the US Congress to simply stipulate that as a recipient of more than $10 $9 million per year of taxpayer money, USADA should focus on its Congressionally-directed mission, and leave the moonlighting to others.
Posted by Roger Pielke, Jr. at 7:07 PM