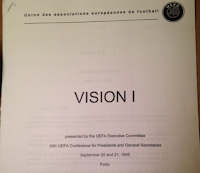 A colleague sent along a document from UEFA from 1995 proposing wholesale reforms in FIFA governance. The proposal, called VISION I, includes some of the reforms today being considered as necessary for FIFA to improve its governance. You can see the entire document here in PDF.

Among the report's recommendations:

The proposal is short (6 pp.) and does not get to far into details, which is proposes to be worked out under a subsequent VISION II.

The document clearly shows that UEFA was aware of many of the organization flaws that characterized FIFA 20 years ago. It also shows that significant reform of FIFA has been articulated for a very long time.

Decisions matter. FIFA missed an opportunity 20 years ago. Will it miss one again today?
Posted by Roger Pielke, Jr. at 9:49 AM