A C+ for Scala's Eight Point Plan for FIFA 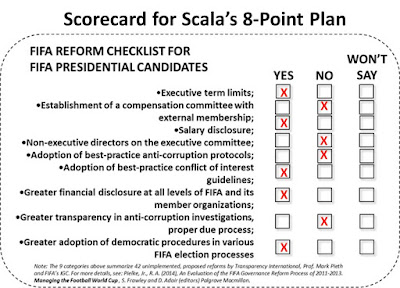 FIFA's Domenico Scala, Chairman of the FIFA Audit and Compliance Committee, has released an Eight Point Plan for reforming the organization (here in PDF).  Here are the eight points:

Overall, the plan merits a grade of C+. You can see my marks on the scorecard at the top of this post. For FIFA, any passing grade in reform efforts is to be applauded.

The plan is missing some key things recommended by others, such as Transparency International, like non-executive directors. Other issues, like the notion of "independent/autonomous bodies," are somewhat muddled.

Even so, the proposals are much closer to best practices than those proposed by FIFA's IGC. That probably means that the plan has no chance to be implemented. However, it is a valuable addition to the growing calls for wholesale reform, and it comes from inside FIFA, which is significant.
Posted by Roger Pielke, Jr. at 12:47 PM