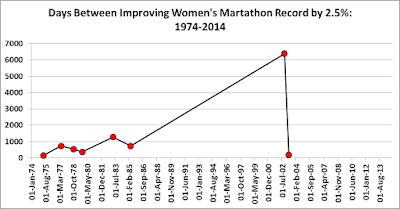 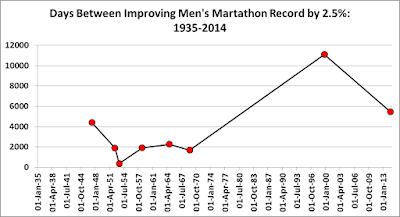 On 28 September 2014, a new men’s marathon record was set at 2 hours, 2 minutes and 57 seconds by Kenya’s Dennis Kimetto. With a reduction of only 2.4% the record would drop below 2 hours, a round number in the marathon that has taken on the significance of the 4-minute mile in earlier generations.

Looking back in time, it took almost 15 years for men to advance the world record by 2.4%. Does that mean that the 2 hour marathon might be forthcoming in the next 15 years?

On the women’s side, the marathon world record improved by 2.4% on average every 23 months from December 1974 to April 1985. It did not see another 2.4% improvement until October 2002, when Paula Radcliffe set a new world record. She advanced the record by another 2.4% just months later.

So are the men on the verge of breaking two hours? That depends on whether you think that the men’s rate of improvement is similar to what it has been since 1969. In that case, no.

Alternatively, if you think the men are comparable to where the women were at in early 2002, then the men are just a Paula Radcliffe away from not just breaking 2 hours, but shattering it.

Data cannot resolve these options.
Posted by Roger Pielke, Jr. at 8:03 AM