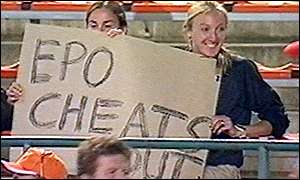 The UK Parliament held an evidentiary hearing yesterday on doping in athletics. The big news that followed was British marathoner, now retired, and world record holder Paula Radcliffe issuing a statement denying that she had doped. (That is Paula above in 2001, protesting Russian runners who had failed a drug test.) Apparently, Radcliffe appears in the leaked IAAF blood data with suspicious values.

The UK Parliament followed up the hearing by releasing a 2013 WADA study on the prevalence of doping (here in PDF). The headlines of that study were reported in the NY Times in 2013. The release of the full study is important nonetheless.

Here is the study's conclusion, with its bottom line (click to zoom in): 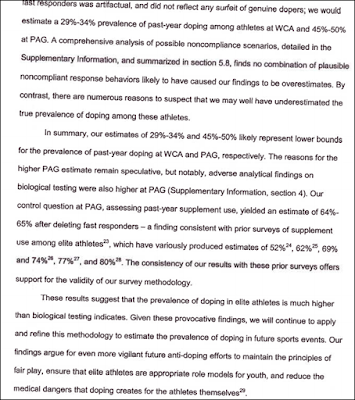 The values here are consistent with more recent research that suggests that as many as half of elite athletes have doped. These two studies together suggest that doping in endemic in elite sports.
Posted by Roger Pielke, Jr. at 9:13 AM