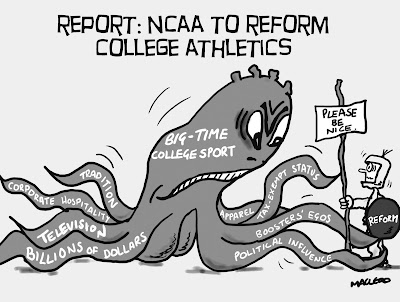 UPDATE 10/28: In the comments Rodney Fort (Thanks!) points out that the signatories of the letter aren't all ADs and provides affiliations and titles:

USA Today has reproduced a letter sent from nine leading athletic directors to Mark Emmert, chair of the NCAA, which calls for deeper NCAA reform.  Here is a link in PDF, and an excerpt:


Ongoing developments with regard to football-driven conference realignments, renegotiated television arrangements and more allegations of major rules violations all further emphasize the need for a fundamentally different value system and change of direction in Division I athletics – not simply for practical adjustments, however useful those adjustments may be.

Without a true focus on the underlying conditions that have produced our current problems, that system will continue to produce similar problems in the future. In contrast, as described in our earlier memorandum, we believe that truly re-connecting Division I athletics to our core values requires:

*A new governance approach that prioritizes those values over conference and institutional self-interest;
*Ending the fragmentation of Division I goals and governance that is inherent in the separate and dominant status of BCS football, so that it is clear to the public who is responsible for the integrated direction of college athletics;
*Providing an approach to finances that will sustain broad-based men’s and women’s athletics throughout Division I, consistent with institutions’ academic and other financial constraints and regardless of the sport in which specific revenues originate;
*Strongly recognizing student-athlete academic success in the distribution of NCAA and BCS national and conference revenues;
*Implementing simplified, consistent and effective rules and enforcement that clearly value integrity rather than merely compliance;
*Considering whether it may now be appropriate to treat student-athletes in “big-time” football differently from athletes in other sports, acknowledging that this would be a substantial change; and,
*In all these ways, establishing a national culture and incentive structure that will promote ethical behavior by institutions, coaches and student-athletes.

We realize that these and the other items outlined in our earlier communication provide summary statements of complicated problems. But with all due respect, in the context of the goals noted above we do not believe that the Board’s proposed agenda, courses of action, or consideration of outside views have been or will be adequate to the fundamental tasks at hand.

Especially interesting is that systems of governance in science are being considered as potential models for governance reform in college athletics:


“We talked about different ways to do what the NCAA says it wants to do, which is to make enforcement clear and more consistent, and more linked to [college sports'] underlying values,” Jeffrey H. Orleans, the former executive director of the Council of Ivy Group Presidents and one of the letter’s signatories, said in an interview on Wednesday. The federal government’s approach to policing itself offers a few clues on how this might be done: The Office of Research Integrity, for instance, investigates research misconduct at the National Institutes of Health and the Centers for Disease Control and Prevention, among other federal agencies.

That body, Orleans said, “is not the FBI, and it’s not the Department of Justice. It is a peer group in the sense that it’s made up of scientists, but they are the people who wind up considering disbarment from federal funds if there’s been some kind of research fraud.”

Orleans said he was not advocating for the NCAA to model itself entirely after the feds. But he does think the association ought to reconsider its current system. “We were looking for ways to deal with the inevitable tension that happens when an organization regulates itself,”  he added. “Peer judgment has its values, but sometimes it has its limits.”

I agree that models of governance for science and technology in universities have potential to offer lessons to reformed governance of athletics, as I wrote last summer.
Posted by Roger Pielke, Jr. at 6:45 AM