FIFA Reforms: Ask Us About Them in March 2012 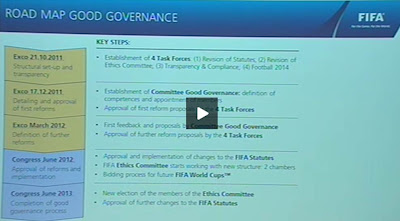 UPDATE #3: Play the Game provides an overview of reactions here.

UPDATE: FIFA has made its press pack available as a PDF here.

The image above comes from the FIFA press conference today in which Sepp Blatter announced a reform agenda for FIFA. The "Road Map Good Governance" includes the establishment of 4 Task Forces and a "Committee Good Governance" to provide recommendations to the FIFA Executive Committee. No specific reforms have been adopted.  Blatter explained to the press that they should come back next March and ask him about them then, implying that changes would be in place by that time.

In the press conference Blatter was asked about the details "Committee Good Governance" and he replied that it would have the following characteristics:
Blatter apologized for earlier invoking Henry Kissinger and other big names (Placido Domingo and Johann Cryuff). Blatter did not seem to have given much thought to the committee or its role and De Gregorio appeared to hasten the end of Blatter's meandering reply to this question.

It will be interesting to see how TI responds to the FIFA proposals, because FIFA has rejected the top-line TI recommendation " to carry out comprehensive governance reforms overseen by a group composed of representatives from outside FIFA (elder statesmen, sponsors, media and civil society) and inside football (federations, clubs, professional leagues, players, women’s football, referees, supporters) in a way that ensures its independence." Will TI allow itself to be co-opted into a process that appears minimalist at best?

The FIFA proposals, while perhaps a small positive step, do not involve the establishment of an independent group.  Indeed the new Task Forces and Committee will be bodies that are created by and report to the FIFA Executive Committee.

In short, FIFA has not yet embarked on a reform agenda. It has set up a few advisory task forces and committees to propose reforms. While new FIFA spokesman Walter De Gregorio's plea to give FIFA time is noted, the bottom line is that today, nothing has changed. While some will point to the announced release of the ISL court documents as a positive step (and indeed it is) it hardly makes up for the fact that governance reform remains off in the future.
Posted by Roger Pielke, Jr. at 7:33 AM