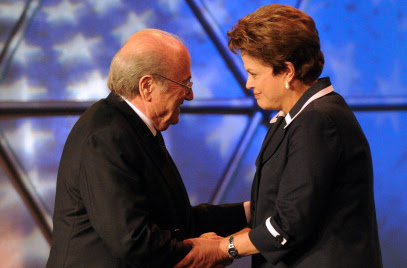 Today at Play the Game 2011, William Gaillard, (director of communications and public affairs for UEFA (Union of European Football Associations) and Senior Advisor to Michel Platini UEFA president) was asked in the Q&A following his presentation about the FC Sion case now being arbitrated. He had a strong reaction, and not in favor of FC Sion (A paraphrase: "Will we soon be challenged on whether having only 11 players on the pitch is an infringement of freedom of employment?").

The latest example of what can happen when the rules promulgated by sports associations (and especially powerful ones, like FIFA) conflict with national sovereignty comes from Brazil:

FIFA has asked Brazil to suspend several laws while it hosts the World Cup, including one that requires theatrical and sports events to provide half-price tickets to people over 65, the paper reported on Saturday.

Rousseff plans to meet FIFA President Joseph Blatter in Brussels on Monday and is ready to compromise on a series of FIFA complaints, Silva told the newspaper.

This reads as if President Rousseff is negotiating with Sepp Blatter not a peer head of state (which would be remarkable enough), but someone far more powerful. So powerful in fact that Rousseff is apparently ready to change laws set through democratically legitimate domestic institutions to ensure that FIFA's costs are not too onerous. Ahem.

The FT understates the circumstances:


[A]ny meeting between Rousseff and Fifa’s head, Sep Blatter, promises to be as interesting as anything on the pitch.

When lex sportiva meets lex imperium interesting things happen. That is one reason why the case of FC Sion is so interesting.  Stay tuned -- Part II coming soon.
Posted by Roger Pielke, Jr. at 1:40 PM