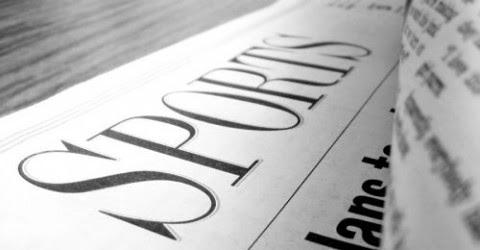 The graph below comes from a study just released by Jörg-Uwe Nieland from the German Sports University in Cologne and Thomas Horky from the Macromedia University for Media and Communication in Hamburg for Play The Game.  It shows a distribution of media coverage of sport for Germany (left) and the USA (right).  German sport coverage is overwhelming dominated by football (soccer) while the USA shows a much flatter distribution across sports.

Other interesting details from the study released so far include the fact that sports writing is dominated by males who focus on athletes and largely focus on what happens on the field rather than issues of policy and governance.  Football is the only true "world sport." None of that seems surprising.

As issues of governance and policy become more important -- and this trend is (in my opinion) already underway -- it will be interesting to see how the sports media handles it. My experience in the world of science is that many science reporters found themselves unprepared for the intense politicization of science observed over the past decade. Many responded defensively (seeking to defend their subjects, who they viewed as allies) by becoming cheerleaders or advocates, or in the best cases, realizing that stories about science were no longer about science. Sport is likely to see similar responses.

The presentation by Nieland and Horky at PTG 2011 can be seen here in PDF.
Posted by Roger Pielke, Jr. at 12:56 AM