What is the NCAA? 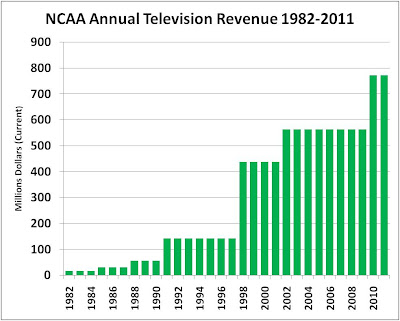 Writing the majority opinion for the 1984 Supreme Court case of NCAA vs. Board of Regents of the University of Oklahoma, Justice John Paul Stevens defined the NCAA:


The NCAA is an association of schools which compete against each other to attract television revenues, not to mention fans and athletes.

The graph at the top of this post shows NCAA television revenue (data from the NCAA here).  The data doesn't exactly match up with the NCAA annual totals because I have distributed the broadcasting contract revenue equally across the years for each agreement.  However, the totals across each contract should reconcile.

The annual average growth in television revenue since 1982 is 14.1%. As an association that attracts revenue, the NCAA appears to be doing just fine.
Posted by Roger Pielke, Jr. at 3:17 PM