The Economist on Football Corruption in Brazil The Economist has a detailed article about the troubles that plague the governance of football in Brazil.  Here is an excerpt:


Ricardo Teixeira, who is president of the local World Cup organising committee and a member of FIFA’s executive committee, has been chairman of the Brazilian Football Confederation (CBF) since 1989. He is a protégé of João Havelange, who ran FIFA for almost a quarter-century until 1998. Mr Teixeira has been fighting accusations of graft for years. In 2001 investigations by Brazil’s Congress into corruption in football found irregularities in a deal arranged by Mr Teixeira under which Nike, an American sportswear firm, sponsored the national team. The congressional committee of inquiry passed on to the public prosecutor some 13 charges against him, including embezzlement, money laundering and tax evasion. All were subsequently dropped. (Nike says the contract was “fully legal in essence and spirit”.)

“Panorama”, a BBC television programme, has accused Mr Teixeira and Mr Havelange of taking bribes in the 1990s related to marketing rights for games. Earlier this year Lord (David) Triesman, the man who launched England’s failed bid to host the World Cup in 2018, said that Mr Teixeira had asked for money in return for his vote. 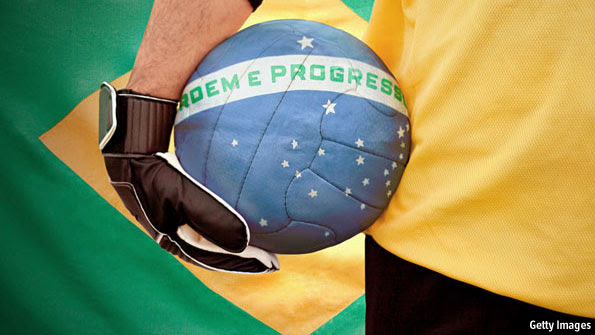 In an interview in Piauí, a Brazilian monthly, Mr Teixeira denied the BBC’s claims. He said the English were “pissed off because they lost” and that he would have his revenge on the BBC: as long as he is at the CBF and FIFA, “they won’t get past the door.” He boasted that in 2014 he would do “the most slippery, unthinkable, Machiavellian things [such as] denying press credentials, barring access, changing game schedules.” The sports minister, Orlando Silva, had to promise that all journalists would be fairly treated and allowed to do their work.

A FIFA investigation cleared Mr Teixeira of Lord Triesman’s allegations. Mr Havelange has not responded to the BBC’s allegations. But the International Olympic Committee, of which Mr Havelange is a member and which has stricter ethical standards than FIFA, is investigating them. This week a Brazilian prosecutor declared that he will order police to look into whether Mr Teixeira was guilty of money laundering and tax crimes.

What is most interesting is not the sordid allegations of corruption recounted in the article, but rather, that The Economist is covering it in some depth. Not good news for FIFA, which is used to flying under the radar.
Posted by Roger Pielke, Jr. at 12:30 PM