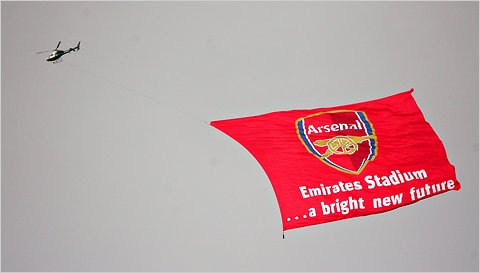 Arsenal's controlling owner, Stan Kroenke, gives a lengthy interview to the Telegraph, in which he explains that Arsène Wenger has his unequivocal support and promises to bring to the job both solid fiscal management and a healthy dose of American pragmatism:


“I haven’t said a lot, I don’t know that I need to. We have really good guys out there in London. Sure, people want to know what we are doing but we are not going to do anything differently than we have ever done. There is no owner with as many years or as many hours in sports as we do. I don’t think so.

"We have had a good amount of success. I have a lot of respect for all of the other owners. I’m not decrying their way. What I am saying is that if you look year after year at sustaining it, Arsenal have done a pretty good job. Arsène Wenger has been the real reason for that and I like our future.”

As the conversation eventually drifts away from Arsenal and back to his teams in America, Kroenke makes a point of introducing Mike Jones, a Rams legend for a match-saving tackle in the final seconds of the Super Bowl in 2000.

Kroenke recounts an incident that has gone down in American folklore as simply ‘The Tackle’ and is savouring the memory. He clearly also believes that Arsenal can experience moments of equivalent glory.

Gooners should be reassured. (H/T arseblog)
Posted by Roger Pielke, Jr. at 6:32 AM