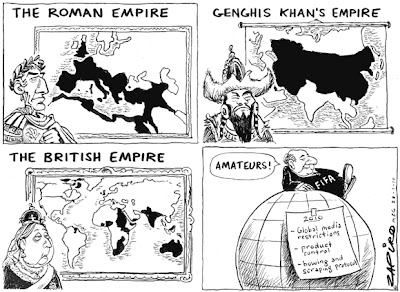 I have a guest post up at Transparency International's Space for Transparency blog.  In it I discuss the prospects for holding FIFA accountable.  Here is how I begin:


In 1983, upon learning that that the 1986 World Cup was assured to be awarded by FIFA to Mexico even before the process had been completed, Henry Kissinger is reported to have said, “The politics of FIFA, they make me nostalgic for the Middle East.”  The decades-long on-again off-again concern about corruption and a lack of transparency in FIFA is on again, and this time, it looks like it will remain a prominent issue that requires some sort of resolution.

That FIFA has governance problems is now generally recognized, even by Sepp Blatter, FIFA’s president, who has promised to present a reform agenda in late October.  In a recent report, Transparency International has helpfully provided FIFA with a blueprint for many useful reforms.  However, because FIFA lies outside the reach of virtually any means of accountability, we should not expect meaningful reform until strong mechanisms of accountability are in place.  This post explains what such mechanisms might look like.

You can read the rest here. Comments welcomed!
Posted by Roger Pielke, Jr. at 6:01 AM