The Case for Sepp Blatter as DOJ Unnamed Co-Conspirator #14

The latest round of FIFA arrests were accompanied by a superseding indictment (here in PDF), in effect an update to the charges that the US Department of Justice is levying against various FIFA officials and their partners.

In the superseding indictment there is the tantalizing possibility that both Jerome Valcke (former FIFA general secretary) and Sepp Blatter (suspended FIFA president) are included as "unnamed co-conspirators" numbers #17 and #14 respectively.

Here is the evidence.

This doesn't give much to go on, but the document provides a few more details.

This description is consistent with media reports describing the role of Jerome Valcke in facilitating the alleged $10 million bribe involving South African officials.

This description is consistent with a report in the Sunday Times (of South Africa) that Sepp Blatter had corresponded with then-South African president Thabo Mbeki about the $10 million payment. The key tell in the superseding indictment is the phrase "the South African government" which is highly suggestive of the relationship revealed by the Sunday Times (SA). Here is one of the emails referred to in that article: 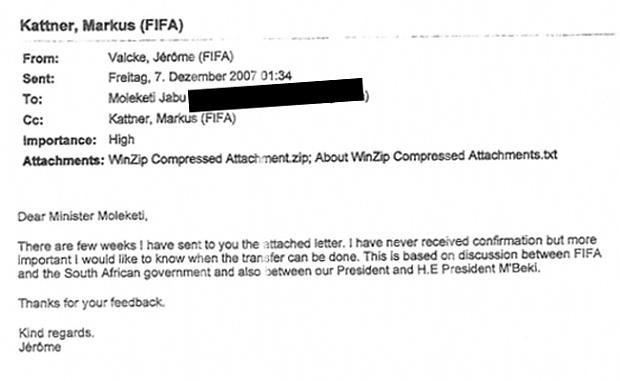 It is not 100% certain, but it seems highly likely. I'd bet a beer on it. If this turns out to be correct, then we might expect formal DOJ charges against Blatter and Valcke before this investigation is over. Stay tuned.
Posted by Roger Pielke, Jr. at 2:50 AM