There is a lot of good potential in the various reform proposals advanced today by FIFA's Executive Committee. However, it's press conference was shaky, with its acting secretary general refusing to reveal his salary and its acting president refusing to engage questions about his sanction by the IOC for taking bribes.

But perhaps the most revealing evidence that FIFA just doesn't "get it" is its newly proposed definition of what it means to be "independent" of FIFA. One can receive up to $125,000 from FIFA, or related organizations, per year and still be considered "independent."

The new definition is found in Appendix 3 of the material released today and here it is in full: 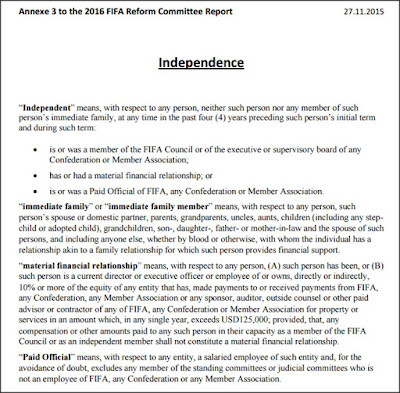 The $125,000 threshold for "independence" is likely a reflection of the incredible amounts of money sloshing around in international football. For many who participate in this world, $125,000 probably is not a big deal. Consider that the members of the FIFA ExCo receive a reported fee of $300,000 for attending a few meetings per year.

But for most individuals who might be considered for independent roles with FIFA, $125,000 is going to be of the same scale or larger than their primary salaries. The new definition has some other problems too, in that it defines business owners (e.g., 10% equity) as having a "material financial interest" but apparently not FIFA's own Council Members or employees of companies or other entities that have relationships with FIFA.

In principle, there is absolutely no problem with compensating independent individuals for services to FIFA. Time is valuable and individuals should be compensated for services. But to maintain true "independence" from FIFA, this compensation cannot come from FIFA or its subsidiary bodies.

A far better strategy for retaining independent advice would be for FIFA to provide a grant (e.g.,FIFA could apply a small fee to each member association -- $5,000 each raises $1 million -- which could be subtracted from their FIFA allocations). This money could then be given to a well-established, legitimate neutral third party, like Transparency International or UNESCO, with a request to set up a mechanism for identification and compensation of "independent" voices participating in FIFA governance.

In that manner FIFA would not be directly responsible for paying these individuals and their compensation would be subject to truly independent oversight and appropriate market-based fees.

FIFA should also consider outsourcing the criteria of "independence" to others with more experience and perspective. Trying to keep this in-house defeats the purpose, and as we have seen, reveals that FIFA isn't quite ready for what true independence implies.
Posted by Roger Pielke, Jr. at 8:17 AM