It's Time to Ask Some Hard Questions of US Soccer 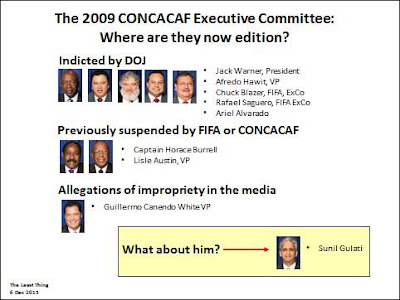 The latest DOJ indictments lead to some hard questions for US Soccer. It's president, Sunil Gulati, is the only one of 9 members of the 2009 CONCACAF executive committee who is not under indictment, previously suspended or accused of improprieties in the media.

Gulati may yet be indicted, he may be an informant or he may be the only CONCACAF official of his era untouched by scandal. Who knows? What is becoming increasingly obvious is that it would be wise for the US soccer community to start thinking about and openly discussing the future of US Soccer, just in case change is right around the corner.

The US media has been remarkably silent on Gulati and US Soccer as the scandal has unfolded. It i time that changed. Some questions to start with:

What happens if Gulati steps down, by choice or due to events?
Who should next lead US Soccer?

I've got some thoughts, which are coming soon. Stay tuned.