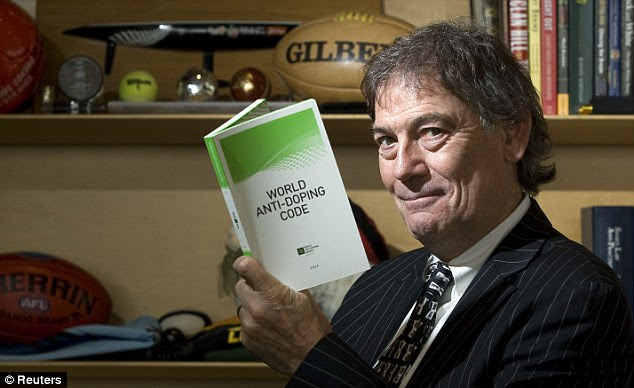 This is a follow up to the previous post on WADA's behavior with respect to research that it commissioned on doping prevalence in sport. That post explained that WADA - the Wolrd Anti-Doping Agency -- has refused to allow scientists to publish WADA-supported research on the prevalence of doping in the peer-reviewed scientific literature. These scientists signed a non-disclosure agreement with WADA in 2011, which remains in effect today.

Why? WADA has not answered this question.

Last September, David Howman, director general of WADA, was asked about this agreement by the UK Parliament's Culture, Media and Sport Committee.  Here is how that exchange begins (here in PDF):

Mr Howman: It was the first practical opportunity we could have to have the people around the table sign the document. It was nothing to do with being retroactive.

The authors of the study take exception to this characterization, writing to the CMS Committee in a letter released this week that Howman is not telling the truth (here in PDF):

The 11 January 2011 meeting of the "Prevalence of Doping Working Group" remains listed on the WADA website. So the Working Group had met twice and WADA did not ask them to sign a non-disclosure agreement. Then, two months after the initial data had been collected, and presumably preliminary results were known, WADA decided that it needed the research team under the NDA.

Then, when asked about this by the CMS Committee Howman was, let's say, somewhat economical with the truth, and stated that the October meeting was the "first practical opportunity" to have the agreement signed. That is clearly not the case.  Not good. We should probably fault the researchers for signing the NDA in the first place, but we can also raise an eyebrow at WADA asking them to do so right in the middle of a research project already well underway.

When pressed on  the issue last September by the CMS Committee, Howman laid blame on the IAAF, the International Association of Athletics Federations, with whom WADA had a "secret agreement" with, unknown to the scientists:


Q174 Chair: Is it standard for such reports to be impeded from being published by a national or international federation?

Mr Howman: No. Most of our research projects are published—in fact all of them. That is part of the condition of our giving grants for research, that they are published and they are published in an appropriate way. That is the way in which we can advance. You have to remember this was not an actual research project, it was a model trial. We had hoped that the models would be in place now and be used more regularly. It just has not worked out that way. The issue is that we are a transparent organisation and we like our stuff to be public.

Q175 Chair: Although it is a model test, it is also a research document in its own right. It includes some research on these two events and it is, therefore, from what you are describing, the only research or research-related document that has not been published that you have commissioned. Is that right?

Mr Howman: The reason for it is that we had to enter into an agreement with the IAAF to have them give our research people access to the athletes who were at the event. We would not have had accreditation; we would not have had the ability. It was under that agreement that there was this clause relating to publication.

Q176 Chair: I understand. But since you regard yourself and your researchers as under a duty to publish, the IAAF is presently preventing you from discharging one of your duties?

Mr Howman: I think you could say that, but we have to be aware that there are contractual issues involved. I have to be fair to say, “Well, if they want to exercise them in a certain way that is their privilege.” I cannot demand the contract be broken.

Q177 Chair: But you could not have imagined that you were going to be entering a contract in the knowledge that you would be impeded from discharging your duty as a result of the other party’s behaviour.

Mr Howman: I think you can be assured we have used our persuasive powers.

What is bizarre about this situation is that science has already caught up and passed the WADA study. We know that a lot of athletes dope -- more recent research provides similar numbers to the WADA study. By holding its researchers hostage to an NDA, WADA is not really hiding anything. They are just making themselves look bad in the face of uncomfortable science.
Posted by Roger Pielke, Jr. at 12:59 PM