Sebastian Coe is the recently elected president of the IAAF. His relationship with Nike, as a potential conflict of interest, has been well documented. Coe is reportedly paid in the "six figures" by Nike, which is presently linked to the ongoing FIFA investigations and under investigation for its Nike Project.

The Daily Mail provided further reason why there is at least the appearance of a conflict of interest:


But the association with Nike is more of an issue when there are other areas of concern. For instance, the decision by the IAAF to award Eugene — close to Nike's headquarters in Beaverton — the 2021 World Athletics Championships without a formal bidding process.

The president of European Athletics, Norway's Svein Arne Hansen, complained of a 'complete lack of process' on behalf of Gothenburg, who at least wanted the chance to bid.

I discovered this morning that Coe is also associated with Mondo SpA, the Italian company responsible for installing virtually all track surfaces for the Olympics and World Championships. Under IAAF ethics rules for conflict of interest, such a relationship with a supplier to IAAF is prohibited (here in PDF).

Coe's COI situations -- as unambiguously defined by the IAAF - provides a great test of the meaningfulness of ethics rules at IAAF. Are they there for show? Or are they taken seriously?

The full IAAF COI guidelines can be seen below. 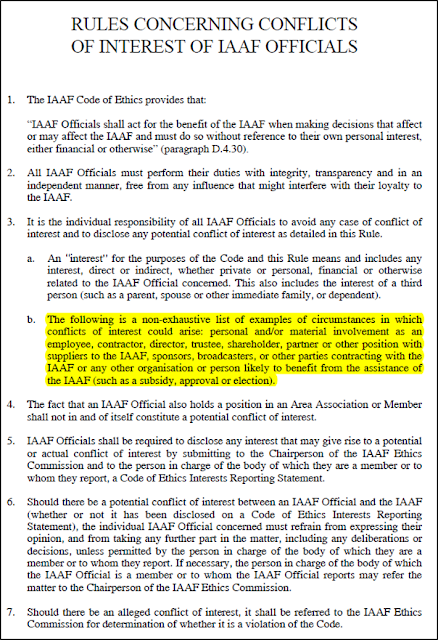