UPDATED: Qatar Gets a Bad Report Card on Human Trafficking from US State Department 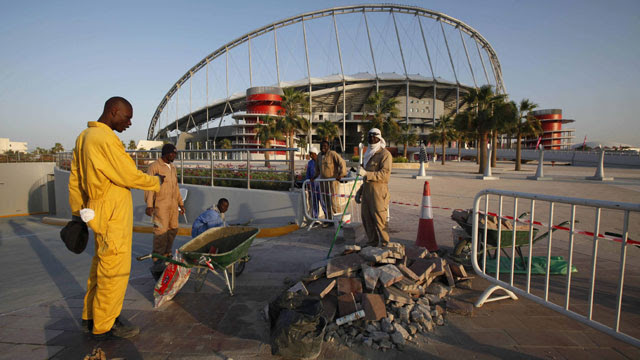 UPDATED 4 Nov 2015 (to reflect the possibility of an action plan that adds two years to the Tier 2 Watch List status).

Every year the US government releases a report card of sorts on human trafficking around the world. The 2015 report is just out from the State Department and they do not have good news for Qatar, which has been dogged by continuing allegations over its treatment of workers who are building the infrastructure for the 2022 FIFA World Cup.

The State Department ranks countries in of 4 tiers, as illustrated in the graphic below. For the second year in a row, Qatar received the second to bottom ranking, the "Tier 2 Watch List." The State Department gives Qatar some credit for some positive steps (at p. 285 here in PDF) but faults the nation on its implementation and reporting. Thus, Qatar remains near the botom of the rankings.

[G]overnments of countries on Tier 3 may be subject to certain restrictions on bilateral assistance, whereby the U.S. government may withhold or withdraw non-humanitarian, non-trade-related foreign assistance. In addition, certain countries on Tier 3 may not receive funding for government employees’ participation in educational and cultural exchange programs. Consistent with the TVPA [Trafficking Victims Protection Act], governments subject to restrictions would also face U.S. opposition to the provision of assistance (except for humanitarian, trade-related, and certain development-related assistance) by international financial institutions, such as the International Monetary Fund and the World Bank.

It is unclear what, exactly, a Tier 3 designation would mean for Qatar and its preparations for the 2022 World Cup, but it would clearly not be a good thing for the tiny nation, or for FIFA.

The US president can waive the ranking if it is determined to be in the interests of the United States. Anything is of course possible, especially in a lame duck presidency, but I think it hard to imagine that President Obama would give Qatar a pass if it does not show marked improvements in 2016. It does seem logical that Qatar would produce an action plan. On the other hand, Reuters reports that the Obama administration forced the State Department to change some of its 2015 rankings to help with its proposed trade agreement.

The bottom line here is that Qatar has effectively been given no more than 4 years year to improve the situation facing workers, or face considerable negative publicity (at least) and possible US and other sanctions. That will only make the World Cup 2022 more controversial than it already is, if you can believe that.
Posted by Roger Pielke, Jr. at 1:54 PM