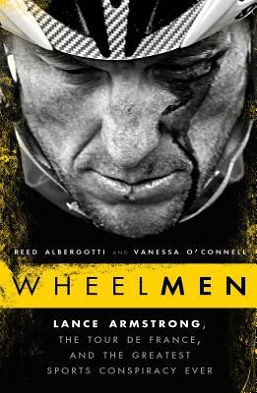 Much has already been written about the fall of Lance Armstrong. More books, movies and television specials will no doubt follow. But whether you are a cycling enthusiast or just curious, an outstanding place to start is Wheelmen by Reed Albergotti and Vanessa O’Connell, both reporters with the Wall Street Journal.

Wheelmen tries hard not to be a “book just about Lance Armstrong,” but instead to paint a “picture of a multi-national conspiracy that yielded its many participants hundreds of millions of dollars over the course of a twenty-four year sweep of time.” The book only partially succeeds in keeping that broader focus, partly because Armstrong is such a compellingly awful person. Were he invented as a fictional character in a novel, the depth of his callousness, greed and megalomania would be probably dismissed as unrealistic.

The authors also seek to tell a “complete, objective, and nuanced story.” Here they mostly succeed, especially with respect to the latter two aims, but they leave several loose ends (described below) that may or may not be resolved in further investigations or legal proceedings. Wheelmen is very well written and researched, and clearly the product of years of investigative reporting which allowed the rapid production of such a high quality book.

The arc of the story is well known. Lance Armstrong emerged as a young professional cyclist in the 1990s with some promise, but who had been held back by a bad temperament. He was diagnosed with testicular cancer which spread throughout his body. After beating the odds and being declared cancer-free, Armstrong returned to cycling in a triumphant manner, ultimately winning the Tour de France seven times in a row while founding the Livestrong cancer charity.

Long accused of violating cycling’s rules against the use of performance enhancing substances in a sport where doping scandals are endemic, Armstrong retired in 2005 with his reputation intact and a net worth of some $100 million or more. Armstrong consorted with with movie stars and powerful politicians, and was even the subject of talk about his own possible future in politics. Like a character in a Greek tragedy, Armstrong’s own hubris brought him back to the sport, an un-retirement that triggered what followed.

The conspiracy came crashing down when the US Anti-Doping Agency (USADA) published its “Reasoned Decision” – the result of an overwhelmingly detailed and thorough investigation with Armstrong at its center. After exhausting his options to stymie or derail the investigation, Armstrong decided not to contest the charges and ultimately admitted that they were true in a widely watched interview with Oprah Winfrey. The fallout of the scandal continues to unfold, with legal proceedings underway following several that are already settled.

Albergotti and O’Connell provide an impressive amount of background and context to the scandal. Armstrong may have been at its center, but it involved a complex array of businesses, financiers, politicians, the media and corruption which apparently reached deep into the very heart of professional cycling itself.

For instance, we learn that Hein Verbruggen, president from 1995 to 2005 of the Switzerland-based Union Cycliste Internationale (UCI) which was responsible for overseeing professional cycling, held a brokerage account at Thomas Weisel Partners (TWP). Weisel was the main sponsor behind Armstrong and the chief underwriter of US Cycling. Verbruggen’s broker at TWP happened to be the godfather of Armstrong’s first child. As Wheelman explains, “it would have been easy for Thomas Weisel Partners to let Verbruggen in on a hot IPO, which could have been worth hundreds of thousands of dollars, if not millions.” Wheelmen provides a suite of allegations of corruption against Verbruggen as one of Armstrong's staunchest defenders over the years.

The cozy relationship, a conflict of interest under any definition of the concept, places Verbruggen’s repeated defenses of Armstrong into a bright new light. Wheelmen is full of enough allegations of high-level corruption against UCI and its leadership that it lends considerable plausibility to claims that a soon-to-be-announced investigation initiated by Brian Cookson, the newly-elected reformist UCI president of UCI, will indeed uncover “dynamite.” As Wheelmen explains, during the Armstrong era “the UCI operated very little like a legitimate governing body.”

Wheelmen provides remarkable revelations throughout. Yet, despite the well-told, well-documented story of greed, corruption and cover-up, the book leaves its readers with a number of loose ends, which is no doubt unavoidable given that the scandal is in many respects still unfolding. At the same time, unanswered questions indicate that there is more investigative work to be done, work that Albergotti and O'Connell find sometimes was not done with respect to Armstrong.

Among the unanswered questions are some tantalizing but fairly vague associations between the cover-up and influential former and current US government officials. For instance, Armstrong enlisted the help of Karl Rove, President George Bush’s former chief of staff, who helped Armstrong retain Washington, DC lawyers well-connected in the US Department of Justice. Perhaps coincidentally, in February, 2012 the US DOJ dropped an investigation into alleged fraud committed during the period when the US Postal System sponsored Armstrong’s team. The dropping occurred “without any explanation.” Surely there is an explanation, but it remains out of public view.

Armstrong also received assistance from former Colorado governor Bill Ritter, a Democrat, who he had helped several years earlier to bring the US Pro Challenge cycling race to Colorado. Political assistance to Armstrong was decidedly bipartisan. Wheelmen gives a brief mention to additional assistance provided to Armstrong by Congressman James Sennsenbrenner (R-WI) who represents the congressional district which is home to Trek, a longtime Armstrong sponsor. Sennsenbrenner did not simply voice support for Armstrong but actually initiated an investigation of USADA and introduced legislation to rein in USADA’s authority.

One does not spend decades in Congress without a fine sense for which way the wind is blowing. By early 2013, Congressman Sennsenbrenner had dropped interest in defending Armstrong commenting through a spokeperson: “Mr. Sensenbrenner is pleased that USADA reached the right outcome in catching an athlete that doped and cheated to win.”

Members of congress do not initiate investigations or introduce legislation without cause. It may be simply that Congressman Sensennbrenner briefly became interested in the rights of athletes and the important (and largely unresolved) issue of USADA’s role as a quasi-but-not-really governmental body. Or perhaps there is more to the story. Perhaps we will never know.

One casualty of the unraveling of the Armstrong conspiracy is that there are in fact important questions to ask about USADA, athlete rights, due process and how the governance of doping in sport jibes with national laws. Wheelmen ends with a focus on whether Lance Armstrong will find redemption. The far more important questions that remain involve the integrity of institutions within sport and beyond. Hopefully the Armstrong conspiracy will focus more attention on such questions in the future.

Wheelmen is an excellent book. I highly recommend it.
Posted by Roger Pielke, Jr. at 12:26 PM