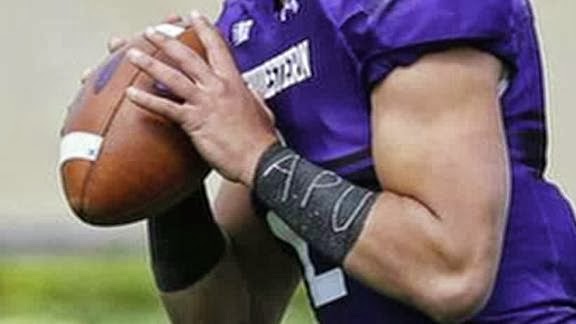 Yesterday in my course, The Governance of Sport, the topic was concussions in the NFL. A lot of the discussion migrated to the implications of concussion risks for college and high school athletes. As soon as class was over I saw the ESPN Outside the Lines report that Northwestern athletes had petitioned to unionize. Not only is this perfectly timed for my class (Thanks Wildcats!) but a huge deal for the NCAA and college athletics.


For the first time in the history of college sports, athletes are asking to be represented by a labor union, taking formal steps on Tuesday to begin the process of being recognized as employees.

Ramogi Huma, president of the National College Players Association, filed a petition in Chicago on behalf of football players at Northwestern University, submitting the form at the regional office of the National Labor Relations Board.

"This is about finally giving college athletes a seat at the table," said Huma, a former UCLA linebacker who created the NCPA as an advocacy group in 2001. "Athletes deserve an equal voice when it comes to their physical, academic and financial protections."

Huma told "Outside The Lines" that the move to unionize players at Northwestern started with quarterback Kain Colter, who reached out to him last spring and asked for help in giving athletes representation in their effort to improve the conditions under which they play NCAA sports. Colter became a leading voice in regular NCPA-organized conference calls among players from around the country.

"The action we're taking isn't because of any mistreatment by Northwestern," Colter said. "We love Northwestern. The school is just playing by the rules of their governing body, the NCAA. We're interested in trying to help all players -- at USC, Stanford, Oklahoma State, everywhere. It's about protecting them and future generations to come.

"Right now the NCAA is like a dictatorship. No one represents us in negotiations. The only way things are going to change is if players have a union."

Reactions have been quick.  The NCAA issued a terse press release:


This union-backed attempt to turn student-athletes into employees undermines the purpose of college: an education. Student-athletes are not employees, and their participation in college sports is voluntary.

Northwestern University took a similar line but acknowledged the legitimacy of the athletes' concerns:


We love and are proud of our students. Northwestern teaches them to be leaders and independent thinkers who will make a positive impact on their communities, the nation and the world. Today's action demonstrates that they are doing so. . . Northwestern believes that our student-athletes are not employees and collective bargaining is therefore not the appropriate method to address these concerns. However, we agree that the health and academic issues being raised by our student-athletes and others are important ones that deserve further consideration."

The Northwestern football coach, Pat Fitzgerald, offered support for his players via Twitter:


Kain and our student-athletes have followed their beliefs with great passion and courage. I'm incredibly proud of our young men! GO CATS!
— Pat Fitzgerald (@coachfitz51) January 28, 2014

So what happens next? Legal expert Michael McCann tells SI.com:


The next step is the NLRB will require that at least 26 of the 85 scholarship players on the Northwestern football team have joined this petition. In order to unionize, there must be at least 30 percent of the group that’s trying to unionize. It sounds like that’s not going to be an issue.

The harder step after that is for the NLRB to assess whether or not student-athletes are, in fact, eligible to unionize. That’s a complicated issue. It doesn’t have an easy answer. The reality is the NLRB will look at what’s called the National Labor Relations Act. It’s a federal law that basically determines whether a group can unionize.

There will be legal challenges, as well, and it’s worth emphasizing that this is not an overnight process. It could take months if not years to play out. But the key issues will be whether or not a student-athlete, especially a football player at a Division I school, is more like an employee than a student.

McCormick and McCormick (2005, PDF) provide an excellent overview of the athlete-as-employee issue, and decidedly come down on the side of athletes as university employees. They conclude:


To call NCAA Division I athletes in revenue-generating sports amateurs is farcical. The NCAA’s droning insistence on labeling them "student-athletes” is done simply to shore up the fiction that they are something other than employees. NCAA rules, promulgated by the university-employers themselves, bar these athletes from earning compensation representing their true worth. Unaware of their market value, constrained by NCAA strictures, and raised in the myth of the student-athlete, they enter into servitude by the thousands every year. Thus, this fiction has worked to convince even the players themselves to bask in the bright, but brief, glow of their status as campus heroes, and has nurtured their unrealistic dreams of glory, obscuring the reality of their exploitation.

The power of myth is undeniable. It has served the economic interests of the NCAA and many other participants in major college sports richly. But the power of the law is also great, and a society that respects the law looks through the myth and the propaganda to facts. The rule of law eschews a “tyranny of labels” and seeks truth. And the truth is that these athletes are employees under the law.

McCann explains to SI.com that a quirk of labor laws in the US means that unionization means different things at public versus private universities:


The National Labor Relations Act, which the Northwestern players are using, does not govern employees at public universities. Student-athletes at public universities who want to join Northwestern in the union effort would have to instead use state labor laws to unionize. This will be a problem for some. States’ laws vary considerably on whether, and how easily, public employees can unionize. Twenty-four of the 50 states are considered “right-to-work” states in that their laws limit opportunities for employees of public institutions, including those employed by state universities, to unionize. Right-to-work states are typically in the south and include Alabama, Arkansas, Georgia, Mississippi, Tennessee, Texas and Virginia. Nebraska, Utah and Iowa are also right-to-work states.

This legal twist means that if college athletes want to be in a union, they need to attend schools where unions not only exist but are possible under the law. In theory, this dynamic could disadvantage public universities in right-to-work states while recruiting high school athletes: If those athletes want to be in a college sports union, they may not be able to do so at public universities in right-to-work states.

What if unionization (and pay/benefits) becomes viewed as a perk by athletes in the recruiting process? Hello Northwestern and Stanford, goodbye Aubrun and Alabama?


I think we’ll see other schools do this. They’re smart, the folks that are doing this. I’m speculating, but I think there will be a trickle effect. I suspect every couple of weeks, we’ll see a new school join. That’ll revisit this topic over and over again, and it’ll give the impression that there is growing support for it.