According to today's FT, UEFA's Financial Fair Play regulations related to teams in the Champions and Europa League competitions have yet to curb the profligate spending of most of the biggest European clubs:


The European Club Association, which represents around 200 clubs across the continent, said the new era of financial prudence instigated by Uefa, in conjunction with the ECA, has yet to be acknowledged by some of its members.

The ECA signed up to Uefa’s Financial Fair Play doctrine, which requires clubs to spend within their means and which takes effect from this season. Under the rules of FFP, clubs have three seasons, starting with the one just commenced, to get their finances into shape.

But Michele Centenaro, general secretary of the ECA, said: “Looking at this year’s summer transfers, the impression is that not all clubs have really understood what Financial Fair Play means. And that is a bit worrying.”

The ECA declined to say which clubs were causing concern. But its general worries follow an ominous warning from Michel Platini, the Uefa president, about the game’s financial problems.

“Red lights are flashing,” he told journalists in Monaco last week. “We cannot live with billions of euros of deficits without paying the consequences one day or another.”

One reason why there may be little concern about the regulations is that UEFA has no sanctions in place until 2013/14, although the spending for the two previous seasons (and starting this year) will determine those sanctions.  This sets up a prisoner's dilemma sort of calculus for the top clubs -- Limit today's spending and risk missing out on next year's Champions League revenue? or Spend freely and risk sanctions 3 years down the road?  It is not hard to see why clubs continue to spend.

According to UEFA (here in PDF) there is an enormous disparity in the spending among European clubs, 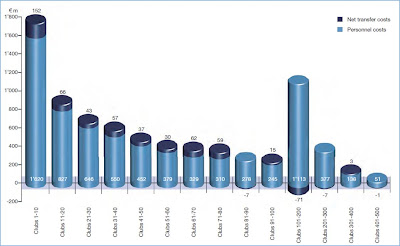 Why do clubs spend so much?  UEFA explains that there is an extremely high correlation between spending on personnel and sporting success, and shown in the following graph for the top leagues in Europe. 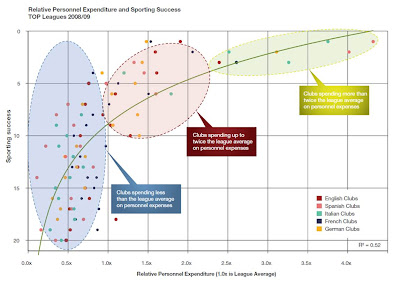 The skewed nature of the graph arises from the fact, as UEFA wryly explains, that there is an upper limit to success but not to spending. With spending so closely correlated with success, perhaps UEFA might have instead chosen to focus on buoying the lower level teams, rather than limiting those at the top.  Even Manchester City, it seems, can continue to spent and survive Financial Fair Play. 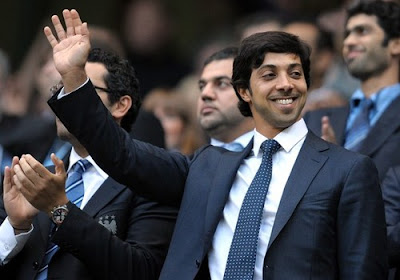