The image in the call-out below is a cover from Sports Illustrated from 1995, but it could be in use again soon based on investigations over 11 months by Yahoo! Sports.  Here is a summary of the bombshell allegations that a now-jailed booster has made against the University of Miami: 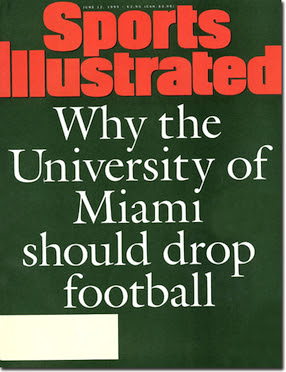 A University of Miami booster, incarcerated for his role in a $930 million Ponzi scheme, has told Yahoo! Sports he provided thousands of impermissible benefits to at least 72 athletes from 2002 through 2010.

In 100 hours of jailhouse interviews during Yahoo! Sports’ 11-month investigation, Hurricanes booster Nevin Shapiro described a sustained, eight-year run of rampant NCAA rule-breaking, some of it with the knowledge or direct participation of at least seven coaches from the Miami football and basketball programs. At a cost that Shapiro estimates in the millions of dollars, he said his benefits to athletes included but were not limited to cash, prostitutes, entertainment in his multimillion-dollar homes and yacht, paid trips to high-end restaurants and nightclubs, jewelry, bounties for on-field play (including bounties for injuring opposing players), travel and, on one occasion, an abortion.

The allegations go all the way to the top of the university. Below is a photo of the booster making the allegations, Nevin Shapiro, along with the Miami head basketball coach and University president Donna Shalala.  Shalala is holding a $50,000 check from Shapiro, which he claims originated in the Ponzi scheme for which he is now serving 20 years in jail. 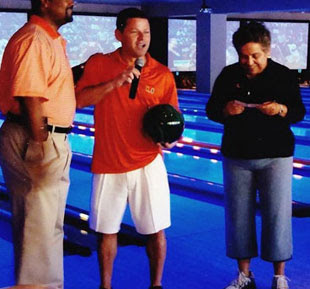 
Both the scope and severity of the major violations that Shapiro both cops to and backs up with bank records, financial statements, credit card receipts, emails, phone bills and witnesses is simply unprecedented in the history of the NCAA.

Most damning, however, is the Miami administration allowing Nevin Shapiro into its world and then never kicking him out.

Just this year Ohio State was able to avoid a lack of institutional control charge by arguing only then-head coach Jim Tressel knew of violations within the program. North Carolina was able to do the same by cordoning blame solely on associate head coach John Blake.

Plausible deniability is a school’s best friend in the NCAA’s enforcement process; setting up walls between frontline coaches and the administrators who serve as the conscience of the university.

Even by the loose standards the NCAA allows, it doesn’t seem plausible Miami could make that claim with Nevin Shapiro. This wasn’t the case of just one action or one relationship with a coach, Shapiro says he dealt with seven different football and basketball coaches, regularly took them out to dinner and strip clubs and even loaned one $5,000.


Shapiro was always begging for attention. His relationships with players were out in the open – from hugs in the postgame locker room, to meals at popular South Beach restaurants, to huge gatherings in VIP sections, all bankrolled by him. Shapiro had been honored by the school on the field during games and taken in action from the Canes sideline. He had access to practices. He twice led the team onto the field and once flew to a road game on the team charter.
When Miami was looking for a replacement for head coach Larry Coker after the 2006 season, Shapiro met with Shalala and offered not to just coach the team for free, but to personally pay $1 million a year for the nation’s best offensive and defensive coordinators.

“‘Just let me walk the sidelines,’” Shapiro said he told Shalala. “She was laughing. I wasn’t.”

When Randy Shannon got the job, Shapiro said he had a face-to-face meeting with him on his first day as coach.

This is not just a story about a booster or an athletic program, but a rot that goes to the core of the University of Miami administration, and highlights systemic problems in college athletics and the NCAA.


Paul Dee ran the Miami athletic department from 1993-2008. Into 2010 he was the chairman of the NCAA’s committee on infractions, where he was known for doling out stern and controversial penalties against USC football and Memphis basketball.

Coming on top of a year of intense scandal, this case should rattle college athletics to its core. In coming clean, Shapiro doesn’t just shine a light on how Miami operated, but further exposes how schools systematically ignore the NCAA rule book.

The NCAA maintains a strict ideal of amateurism in an effort to avoid having to pay taxes or its players. The rulebook is worth billions to the universities, which don’t hesitate to pay major salaries and benefits to administrators and coaches. However, denying players an ability to earn extra money honestly actually makes them more susceptible to people such as Shapiro, who despite the open support of the school was a cutthroat thief and con man.

It’s the NCAA’s own statutes that provided Shapiro with much of his power, access and influence over the very players the NCAA claims it is protecting. All while the administrators look on and get rich.
Shalala, the school’s high-profile president, is like so many college administrators. They talk a big game. She told ESPN the Magazine that she constantly looking out for shady people around the program; “I’m on alert all the time,” she said. Last week she was one of 54 hand picked presidents that participated in a NCAA retreat about reforming college sports.

And yet for years, Nevin Shapiro was able to run wild.

If the Miami scandal does not lead to major reform of college athletics and the NCAA then nothing will.
Posted by Roger Pielke, Jr. at 6:51 AM