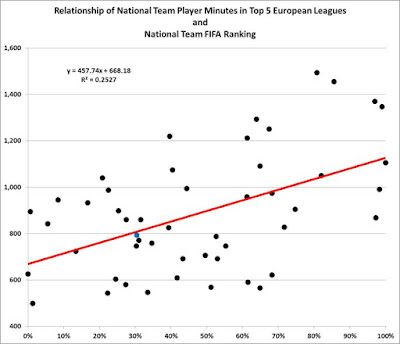 I was curious about the on-again, off-again debate over whether US players should try to play more in Europe as a way to improve the US men's national team. So I have created the graph above.

It shows on the X-axis the percent of minutes played by each national team of players who are with club team in the Big 5 European leagues, that is, the English Premier League, the Spanish Liga, the Italian Seria A, the German Bundesliga and the French Ligue . Data comes from Figure 11 here, courtesy CIES. The Y-axis shows the current FIFA ranking, courtesy FIFA.

The red line shows the least squares fit, and in the upper left is the line's equation, showing an r-squared of about 0.25. The relationship is not particularly strong, but there is an apparent relationship.

Perhaps more interesting? The USA (highlighted by the blue dot at about coordinates 30%, 800), is right about on the trend line. So too is England at 100%, 1100.  Way above the trend line: Germany, Spain, Argentina, Belgium. Way below: Italy, France, Ivory Coast, Senegal.

I reckon there is a bit here for everyone. But it does look like the USA is right about you'd expect it to be given the minutes played among its national team players in the Big 5 leagues. There is also some evidence to suggest that having more players with more minutes would be beneficial, but much more matters than just Big 5 minutes. (And yes it'd be nice to have this same data minus goalies.)