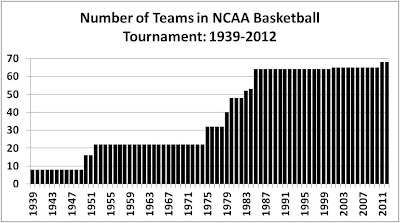 1. In both cases regional leagues have evolved over a long period of time and command intense loyalty among fans (in Europe these are national leagues, in the US they are regional conferences- Big 10, Big 12, Big East, Pac12, etc).

2. The regional leagues generate highly uneven contests which has worked for the big teams (who can dominate) and for the little teams (since they get exposure to a high level of play).

3. TV has made a significant impact relatively recently compared to other sports (the 1984 antitrust case in the US opened up college football to blanket coverage, European leagues only really achieved significant exposure with the advent of pay TV systems in the late 1980s).

5. The potential TV revenues are driving realignments. For once, European football is ahead of American football. The European Cup, which was really an extended version of NCAA basketball’s March Madness (or vice versa) morphed into the Champions League in the 1990s, to generate an increased number of match-ups between top teams from different regional leagues.

The news that US college football has adopted a limited playoff system in coming years has motivated much discussion over the past week.  It is a subject I'll return to before long.

For now I'd point to the graph at the top of this post which shows the history of the expansion of the NCAA college basketball tournament. It shows that tournament expansion is the norm. Much the same can be said about the European club championships and the European championships, which are going to expand significantly in Euro 2016 in France.

How long will the college football tournament stay at 4 games? My guess is not as long as the NCAA stayed at 8 games.
Posted by Roger Pielke, Jr. at 7:49 AM