Nationalism and patriotism are important concepts in political culture which are also expressed on a daily basis in sporting competitions. The Stanford Encyclopedia of Philosophy discusses the concepts as follows:

Discussions of both patriotism and nationalism are often marred by lack of clarity due to the failure to distinguish the two. Many authors use the two terms interchangeably. Among those who do not, quite a few have made the distinction in ways that are not very helpful. In the 19th century, Lord Acton contrasted “nationality” and patriotism as affection and instinct vs. a moral relation. Nationality is “our connection with the race” that is “merely natural or physical,” while patriotism is the awareness of our moral duties to the political community (Acton 1972, 163). In the 20th century, Elie Kedourie did the opposite, presenting nationalism as a full-fledged philosophical and political doctrine about nations as basic units of humanity within which the individual can find freedom and fulfilment, and patriotism as mere sentiment of affection for one's country (Kedourie 1985, 73–74).

George Orwell contrasted the two in terms of aggressive vs. defensive attitudes. Nationalism is about power: its adherent wants to acquire as much power and prestige as possible for his nation, in which he submerges his individuality. While nationalism is accordingly aggressive, patriotism is defensive: it is a devotion to a particular place and a way of life one thinks best, but has no wish to impose on others (Orwell 1968, 362). This way of distinguishing the two attitudes comes close to an approach popular among politicians and widespread in everyday discourse that indicates a double standard of the form “us vs. them.” Country and nation are first run together, and then patriotism and nationalism are distinguished in terms of the strength of the love and special concern one feels for it, the degree of one's identification with it. When these are exhibited in a reasonable degree and without ill thoughts about others and hostile actions towards them, that is patriotism; when they become unbridled and cause one to think ill of others and act badly towards them, that is nationalism. Conveniently enough, it usually turns out that we are patriots, while they are nationalists...

My attention to this subject resulted from a column in this week's FT by Simon Kuper who argues that the Spanish national football team has served as a powerful means of integrating the nation.  He writes:


When Spain won the World Cup in 2010, many fans celebrated even in Bilbao and Barcelona. These people were not binning their regional identities. Rather, they felt both Basque and Spanish, or Catalan and Spanish. Xavi himself again showed the way: after the World Cup final, he ran around the field waving a Catalan flag. This was a new sort of nationalism, one that Franco would not have understood. . . 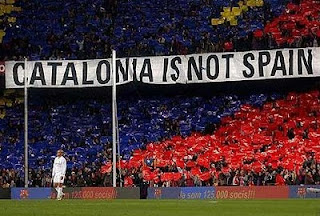 All over Spain, people are watching. Meanwhile, the government battles to stay in the euro. But even if it fails, Spain will surely keep exchanging cutting-edge knowledge with other European countries and retain its improved emotional relationship between regions and centre. The new Spain still exists, and this team exemplifies it.

If it works at the national level, then a logical next step would be, why not use sport at the European level as a means of fostering "europatriotism"? Indeed, some have argued that the entire European project has been an antidote to nationalism on the continent, and an extsention to sport would seem to make sense.

Writing in 2006 Kuper readily dismissed such thinking in a discussion of the Ryder Cup, the only pan-European team competition in major sports:


The "European" veneer at Ryder Cups is thin. Daniel Keohane, senior research fellow at the Centre for European Reform, a London think-tank, says: "It's interesting that in the last few holes, when a European makes a putt, they take out their national flag and go off to celebrate with their national supporters."

And yet Europatriotism exists. A "Eurobarometer" survey for the European Commission last year showed that 63 per cent of Europeans felt "proud" to be Europeans. Britain scored lowest, with 44 per cent. However, proud Europeans are almost all proud of their own countries. Europatriotism doesn't replace national pride. It supplements it.

And although Europatriotism is a widespread sentiment, it's a weak one. Nobody has ever run drunken out of his house waving the EU flag. That's why Romano Prodi, then commission president, got nowhere with his suggestion that European teams in the Olympics fly the European flag besides their national ones.

Even the players in the Ryder Cup seldom lose themselves in Europatriotism. Asked "what is patriotism to you guys?", Ireland's Padraig Harrington replied: "I think we are playing for our tour." Italy's Costantino Rocca said of the Americans: "They are more attached to this cup than we are because they are from one nation."

Brussels will have to accept that Europatriotism is a weaker emotion than real patriotism. Then it might consider adopting the Ryder Cup as a model. Keohane notes that the European team was created not out of love but out of pragmatism. It was accepted as the only way to compete with the outside world. That is probably how most Europeans regard the EU.

With the EU and the Euro Zone facing a massive political crisis of identity, it may again be time to rethink Romano Prodi's suggestion of using sport as a means of cultural and social integration. Pan-European elections would have a similar, and much more significant, effect of focusing attention on Europe rather than on its member states.

Of course, such reflection might only serve to rue opportunities missed. Developing a sense of patriotism for an institution only a few decades old is always going to be a mountain to climb in the context of nationalist passions stoked for centuries and longer.
Posted by Roger Pielke, Jr. at 6:23 AM