Should IOC Members be on the WADA Athlete Committee? 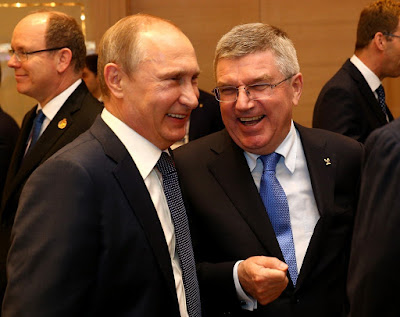 Last week a dispute between WADA and the IOC became public. The Chair of the WADA Athlete Committee Beckie Scott told the BBC that she did not believe that a monetary fine would be a sufficient basis for allowing Russian athletes to rejoin international competitions. The interview came after the WADA Athlete Committee issued a statement following its meeting in London last week. That statement included 8 outcomes, one of which was: "The Committee requested that the Court of Arbitration for Sport (CAS) improve and strengthen its independence and continually strive to increase the quality of its arbitrators."

CAS is closely related to the IOC and its independence has been the subject of considerable debate over the years (here is a good overview in PDF). CAS is overseen by officials of the IOC and its related sports bodies.

Then just a few days later, two members of the WADA Athletes Committee who are also the chair and vice-chair of the IOC Athletes' Commisstion (Angela Ruggiero and Tony Estanguet) issued a hard-hitting rebuke of Beckie Scott . They wrote:


"We believe the comments made by the chair of WADAs Athlete Committee are inappropriate at this time. We do not wish to speculate, and we hope that other Athletes’ Commissions will refrain from comment until the full facts of the case emerge and the investigations are completed."

The full IOC Athletes' Commission issued a further statement that took issue with the statement of the WADA Athletes Committee:


“As the IOC Athletes’ Commission and also members of the WADA Athlete Committee, we believe the comments questioning the independence of CAS and the quality of the arbitrators is misguided. A number of highest courts of different countries have confirmed the independence of CAS and such comments only lead to mistrust and confusion. We support CAS in its ability to fight for clean sport and want to reassure the athletes of the world in this regard.”

Confusing?  Perhaps.  But there appears to be a simple explanation of why these 5 athletes would sign onto to different statements saying opposite things just a few days apart, the first from WADA and the second from IOC.

They have a conflict of interest.

As IOC members they are representatives of the IOC's interests, which do not always coincide with the objectives and policies of WADA. The five athletes who signed on to the WADA statement last week were obviously shown the error of their ways in the days that followed, upon which they issued their corrective statement.

This is a problem.

Earlier this year, in testimony before the US Congress, Travis Tygart, the head of USADA, characterized the role of IOC officials in WADA governance as "the fox guarding the hen house" (here in PDF).  He explained of IOC officials ("sport members"):


"These sport members are not mere figureheads but are lifetime sport executives with strong incentive to influence WADA decisions to advance their own sport interests. . . Unfortunately, WADA’s governance structure, lacking any meaningful conflict of interest policy to separate sport interests from WADA governance"

Tygart suggested that there is a quick fix:


The good news is that WADA’s conflicted governance model could be easily solved by removing sport leaders from the WADA governance and implementing a proper conflict-of interest policy which prohibits governing members from simultaneously holding a governing role within a sports organization under WADA’s jurisdiction.

WADA does have a conflict of interest policy (here in PDF) which states:

"Every person who is subject to the Policy shall, in the exercise of his or her functions on behalf of WADA, be free of undue influence or other factors which may give rise to a conflict between his or her own interest or the interest of any other person and that of WADA."

We have clear evidence that five members of the WADA Athlete Committee have a clear conflict with respect to their IOC roles. What is the WADA procedure for dealing with such a situation?

The WADA President simply needs to say that this situation is ridiculous and remove (or ask to resign) the athletes with a clear conflict of interest. The IOC athletes could then speak for the IOC from their commission and the WADA athletes could speak from their committee. Conflict removed. Mixed messages cleaned up.

Who is the WADA President? Craig Reedie, member of the IOC since 1994.

Let me answer the question I posed in the title: Should IOC Members be on the WADA Athlete Committee?

No, of course not. But when you dig into this a bit you see clearly how WADA is compromised by IOC members participating in its governance. This should be fixed.
Posted by Roger Pielke, Jr. at 10:19 AM