UPDATE: As I completed this post I see that Makwala has been given an extraordinary opportunity by IAAF to compete in the 200m via a time trial (solo) sprint. This story continues to develop. Official IAAF statement here.

The video above shows sprinter Issac Makwala, a sprinter from Botswana and one of the world's fastest runners, being turned away involuntarily from the athlete's yesterday at the 2017 IAAF World Championships in London.

This post seeks to document what appears to be a gross violation of a athlete's due process rights with profound and irreversible consequences for his career as a professional athlete. I'll update as new information is available and am happy to take comments or critique.

This episode involves an outbreak of norovirus, a high contagious gastrointestinal bug that broke out among athletes and their entourages who were reportedly staying at The Tower Hotel in London (the hotel denies any responsibility). Some 30 people were reportedly affected. Norovirus causes vomiting and diarrhea but is not generally viewed to be serious, with symptoms going away after a few days with no treatment.

On 6 August the IAAF shared advice with athletes and their entourages staying at the hotel (emphases added):


To contain the situation and protect your athletes, we strongly request you
comply with the following directions:

1. Report to the Guoman Tower Hotel Medical Room (430) as soon as possible any episode of diarrhoea and vomiting. This report should include the name, category of the person and the room number 2. The person must be isolated and hotel staff will assist in allocating another room. 3. Recommendations from Public Health England say the affected person must remain isolated for 48 hours after the last episode of vomiting or diarrhoea and therefore, the person will need to take their meals in their room.

The Hotel have applied Public Health England’s recommendations on enhanced cleaning procedures and will support all measures in relation to these matters.

Individuals must be vigilant on personal hygiene and apply the following:

There was nothing in the advice about disqualification. In fact, over the weekend athletes diagnosed with Norovirus continued to participate in the events, such as Germany's Neele Eckhardt, shown below. 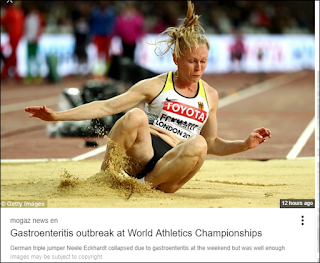 The advice from Public Health England being referred to by the IAAF can be found here (and highlighted below). 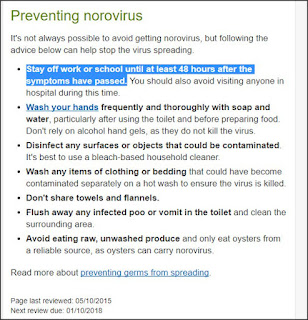 According to reports, over the weekend, Makwala was observed to have thrown up, barfed, puked (though details here are contested as well). On 7 August Makwala was disqualified ("withdrawn" in the IAAF parlance) from the 200m by the IAAF, which stated, "Isaac Makwala (BOT) was withdrawn from the men’s 200m (1st Round) due to a medical condition on the instruction of the IAAF Medical Delegate (Rule 113)."

Rule 133 refers to the IAAF Competition Rules, and it states:


The Medical Delegate shall have ultimate authority on all medical matters.

Makwala claimed he was perfectly healthy and ready to run. But the IAAF was prohibiting him from participating. That led to the situation shown in the video above where Makwala was forcibly prevented from entering the venue.

According to the official Twitter account of the government of Botswana (yes, this is serious), Makwala represented to officials that his forced withdrawal was a legal matter under UK law.

He said according to England Public Health laws, those affected by the virus are to be isolated for 48rs & Makwala was among those isolated.
— Botswana Government (@BWGovernment) August 8, 2017

In its 8 August statement on the situation, the IAAF used language indicating that they were following "UK health regulations":


As per UK health regulations, it was requested that he be quarantined in his room for 48 hours, a period which ends at 14:00hrs tomorrow (9 Aug).

This statement is -- in measured language -- disingenuous. There are no such UK "heath regulations" related to a "quarantine." In fact, the Public Health England statement released by the IAAF makes absolutely no mention of regulations or quarantine: 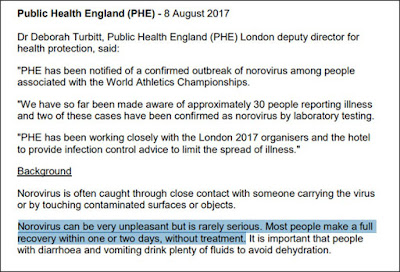 In fact, the statement notes that the virus is "rarely serious."

So here is how the situation looks:
At a minimum the IAAF (or some other body) should empanel an independent investigation into this situation, including the decision and the communication associated with it. Clearly things can be much improved.

Finally, below is a lengthy BBC interview with Dr. Pam Venning, head of the IAAF medical services for the World Championships and the authority with the power to disqualify an athlete involuntarily under IAAF Rule 113. (Note: Some people can't see the video, which may be due to your point of access or a geoblock, try this link also.)