This post is, as promised, a follow-up to my recent post asking, How Independent is WADA's Sochi Investigation?  In that post I noted that (a) WADA's Conflict of Interest Policy was not public, (b) nor was Richard McLaren's "Statement of Independence and Interest."  Further, (c) McLaren's pay by WADA had not been disclosed. In addition, (d) WADA's oft-cited Media Relations Policy also was not publicly available.

Thanks to WADA's public relations team, I can close the loop on these issues. The bottom line here is that with respect to conflicts of interest, WADA is flying without a net. Everything is great until you need it.

WADA sent it to me and I have posted it here in PDF. It is dated December, 2015 and was last modified May, 2016. It is substantively empty. The Policy states:


Every person who is subject to the Policy shall, in the exercise of his or her functions on behalf of WADA, be free of undue influence or other factors which may give rise to a conflict between his or her own interest or the interest of any other person and that of WADA.

In stark contrast, other organizations - including IAAF, IOC, Nike and others -- have clearly defined COI policies. WADA falls short.

(b) What did Richard McLaren disclose?

Absolutely nothing. Here it is in full (click on it for a bigger version): 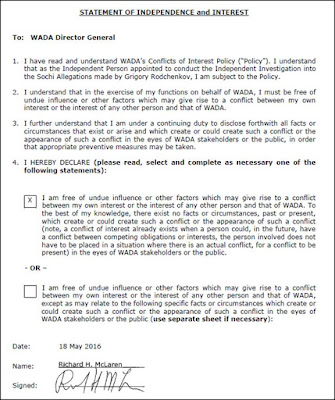 Since WADA doesn't define what a conflict of interest is, this statement doesn't mean much. Maybe he has nothing to disclose (well, he is being paid by WADA). Who knows? -- And that is the problem.

(c) How much is Richard McLaren being paid by WADA?

WADA responded to my query with:


With regards to Richard McLaren’s remuneration, it is not for public disclosure.

WADA refers to the fact that McLaren has signed a non-disclosure agreement (which has not been released) and is to follow the WADA Media Policy.  In response to my query, WADA pointed me instead to this document which is not WADA's Media Policy but apparently a new policy created just for the Sochi Investigation. This also does not say much.

With respect to dealing with issues of conflict of interest, WADA scores poorly. They have a lot of work to do to get up to the level of IAAF and IOC.  On the positive side, WADA's communications team was responsive and cheerful.

Does any of this matter? Yes it matters. WADA, whose motto is "Play True" is doing business without a real conflict of interest policy. This in itself is remarkable. Given that it is now playing a central role in overseeing important investigations related to national federations and even nations being banned from the Olympics, WADA will need every bit of institutional integrity and backbone that it can get. As we have seen with FIFA and IAAF, flying without the proverbial net is just fine -- until you need it and crash.
Posted by Roger Pielke, Jr. at 9:36 AM