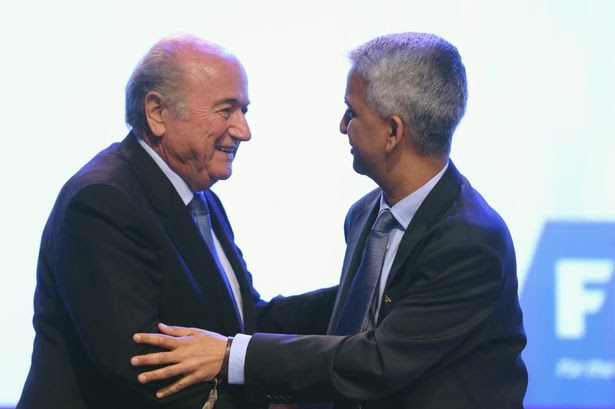 Sunil Gulati has given his first meaningful interview in a long time to Sports Illustrated. He addresses several FIFA and CONCACAF issues. Gulati's answers in paces are misleading and in some cases, just incorrect. His statements lead to more questions about his role at the head of US Soccer and long-term roles in FIFA and CONCACAF.

Here are some highlights that I have picked out.

Gulati is unconcerned about Sepp Blatter's revelations that the selection of Russia 2018 and USA 2022 was made in advance by members of FIFA's ExCo:

The first thing Mr. Blatter said was that we had an agreement to go to Russia because it was a big country and so on and so forth, and that’s what set off a lot of the issues in Europe … A board can decide and then change their mind—pretty simple. Unless the agreement was based on something inappropriate and that’s not what he suggested … three or four European voters changed their mind. They’ve got the right to do that.

I don’t attach too much to all that. That’s different than saying I don’t any concerns to the whole process.

Given the rampant corruption in the process documented by Heidi Blake and Jonathan Calvert in The Ugly Game, Gulati's reaction seems a bit blasé and incurious.

Gulati's apparent lack of concern about FIFA's awarding of the 2018 and 2022 World Cup tournaments are one reason why it would have been appropriate for him to have appeared before the US Congress, when he was recently invited. Gulati explains why he refused to participate and instead sent Dann Flynn, who put in a dismal performance:


It’s not as if we sent our summer intern. We sent the CEO of the organization and frankly didn’t know the other participants in the panel until a couple days before … Once you saw the other members of the panel then it was clear it was going to be more about [FIFA], but that wasn’t the focus early on.

Gulati is not playing it straight here. Before the Congressional hearing, the Committee's Chair, Senator Jerry Moran (R-KS), clearly explained the scope of the hearing well in advance:


The recent revelations of bribery and mismanagement at FIFA should be of concern to us all. The organization’s culture of corruption is turning a blind eye to significant human rights violations and the tragic loss of lives. This hearing on the recent FIFA scandals will begin the discussion about our country’s own participation in the organization, ways the United States and our allies can work to reform FIFA, and how we can restore integrity to the game so many Americans and citizens of the world enjoy.

Gulati also gives an unsatisfactory answer when asked about his relationship with Chuck Blazer and wrongdoing at CONCACAF, where Gulati was (and still is) on its Executive Committee:


For sure, Chuck and I were close for a long time. That’s true … Chuck was a good friend for a long time and a lifestyle that was different than mine, but was involved in financial markets separate and apart from what he did in the soccer world.

Gulati seems to be suggesting that his good friend's opulent lifestyle was funded by work that Blazer was doing outside of soccer.

You might want to believe that, until Gulati continues:


We had audited financials [at CONCACAF]. You rely on people that are in charge, especially when you have audited financials, that those are representing the organization. That’s completely separate from the things that were talked about in May [when indictments were handed down]. None of those would have ever gotten to the financials. So you’ve got two separate things. Think of the following: CONCACAF engaged in an integrity report and published results two or three years ago that looked a whole series of things. None of the things that came out in May were part of that report.

Gulati's claim is simply remarkable, as it is clearly wrong. Here is what the CONCACAF Integrity Report actually concluded:


[Jack] Warner and [Chuck] Blazer, together and individually, used their official positions to promote their own self-interests, and frequently acted with disregard for the interests of the CONCACAF member associations and with disdain for the rules that governed their conduct. Furthermore, it is apparent that Warner and Blazer each was aware of the risk of potential misconduct posed by the other and was most capable of holding the other accountable; but neither did so, at least in part, to preserve the unfettered freedom to act in his own self-interest.

The CONCACAF Integrity report alleges that some $88 million was misappropriated by Blazer and Warner. The report alleges explicitly that some of that money was used to  pay for Blazer's Trump Tower apartment, Miami South Beach apartments, Bahamas apartment, a Hummer and more.

Gulati says with a straight face that he believed that Blazer's lifestyle was supported by "financial markets" when CONCACAF had produced a report clearly showing otherwise, as Gulati sat on the CONCACAF ExCo? Seriously?

I really, really want to believe that US Soccer is among the good guys in the world of FIFA. I really do. But that stance is a hard one to adopt when Sunil Gulati is so obviously taking us for fools.
Posted by Roger Pielke, Jr. at 7:38 AM