Who Had the Hardest Route to WC2014 Qualification? 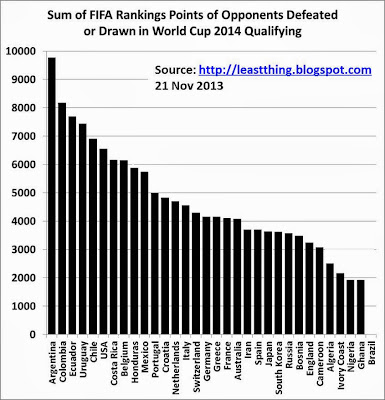 Which team had the easiest time qualifying for the 2014 World Cup? How about the hardest?

To answer these questions I created an index of achievement. Specifically, I took the October 2013 FIFA World Rankings and used them as the basis for creating an index based on performance in World Cup qualification. I used a simple metric, a team gets all of their opponents ranking points for a win and half of those points for a draw. Of course, a defeat results in zero points. One could of course devise other plausible ways of tallying points.

According to FIFA there were 820 matches in total played in qualification for the 2014 World Cup. Not all teams played the same number of qualifiers, nor did each team face the same quality of opponents.

Here is how the numbers stack up:


Brazil obviously had the easiest route to qualification, serving as host and automatically qualifying.  The highest achievers come all from CONMEBOL, with Argentina leading the way. The USA was next highest. Belgium is the highest performer from UEFA.

Germany and Greece sit squarely in the middle. England was the lowest achieving UEFA squad, earning less than one third of the points tallied by Argentina. The 5 CAF teams all fall at the bottom of the rankings.

All data for this exercise comes from FIFA.

Nick Harris (@sportingintel) parses the data in per match fashion: 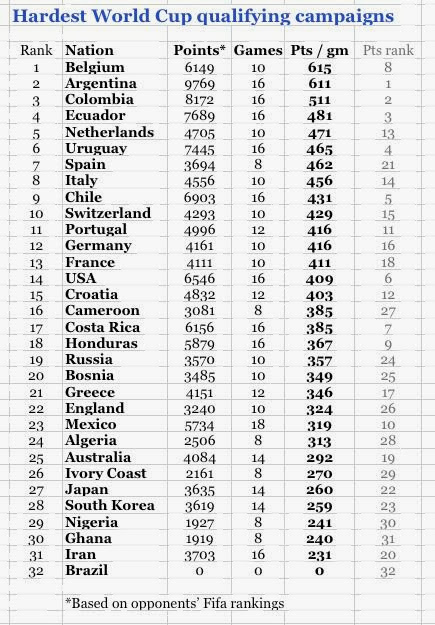