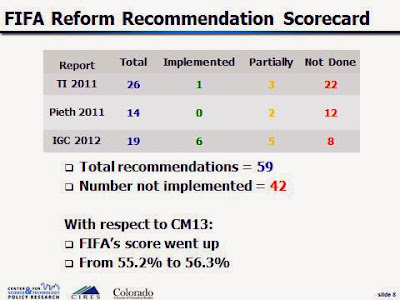 Last week at Play the Game, I presented the results of my evaluation of the recently-completed  FIFA reform project. A summary of what I found can be seen in the slide above. In short, FIFA took some small steps forward, but has a long way to go to raise its governance to what experts would judge to be minimally acceptable standards.

In the panel discussion that followed the presentation both Mark Pieth, who chaired the FIFA reform project, and Walter DeGregorio, FIFA spokesman, put up some very mild resistance to the numbers that I presented.  The session is pictured below, with from left to right, Osasu Obayiuwana, me, Pieth and DeGregorio, photo courtesy Play the Game 2013 and Thomas Søndergaard. Note: you can watch the presentations here.

DeGregorio tried to impeach my analysis by quoting Winston Churchill as saying, "I only believe in statistics that I doctored myself." Unfortunately, that "quote" from Churchill was apparently manufactured by Goebbels in an effort to discredit Churchill. On several levels this was probably not DeGregorio's best response. Even so, DeGregorio did not really offer much to contradict my evaluation and in his own off-the-cuff remarks, underscored the challenges that FIFA faces in furthering reform (DeGregorio's formal presentation, which he did not give, can be found here in PDF).

Professor Pieth asserted his familiarity with the empirical science and took issue with the summing of the recommendations. Fair enough. They are presented in a convenient tabular form above and can easily be considered report-by-report. But, after the pro forma objections, Pieth gave an excellent presentation that really jibed well with what I presented.

You can do a lot of things with data and statistics. However, one thing that you can't do is make FIFA's reform effort look like a success.
Posted by Roger Pielke, Jr. at 7:23 AM