Meanwhile Back in the NCAA

While I've been paying attention to the various aspects of the Lance Armstrong affair, there have been some interesting commentaries published with respect to the NCAA.

Writing in the Atlantic, which seems to have taken up NCAA issues of late, attorney Stephen A. Miller makes the case that the NCAA needs help from an independent body to conduct investigations and enforce its rules.  Miller provides an overview of the shortfalls in NCAA enforcement and investigations, and offers some suggestions for improvement.  He concludes:


The NCAA draws much of its marketing power from its image as a custodian of the amateur ideal in America. To protect its own image, the NCAA needs to take enforcement of its regulations more seriously and promote a transparent and fair system that bolsters, rather than undercuts, that image. Otherwise, the NCAA may discover the extent to which its image has been devalued when it tries to negotiate future media contracts or when a group of frustrated member-institutions secede from the NCAA to create a new and improved organization to serve the same function.

SI provides an update on the status of O'Bannon vs. NCAA, an excerpt:


Former UCLA basketball star Ed O'Bannon's class action lawsuit against the NCAA continues to set the table for radical changes to college sports. O'Bannon, who contends that former players should be compensated for the NCAA's use of their likeness and name, recently scored two pretrial victories.

First, a judge ordered ESPN, which is not a defendant, to hand over its television and licensing contracts for D-I men's basketball and football. ESPN unsuccessfully argued that these contracts are confidential and that O'Bannon's document requests are "ridiculously expansive and irrelevant." Armed with specific information as to how much the NCAA earns from its relationship with ESPN, O'Bannon can more effectively calculate the billions of dollars he and other plaintiffs purportedly should have earned.

SI says that the trial remains more than a year away, giving me plenty of time to dive into the issues and incorporate them into a paper on the NCAA as a policy problem, which is on my to-do list for 2013.

Finally, at the By-Law Blog, John Infante responds to Brad Wolverton and makes the radical suggestion that students should be able to major in athletics: 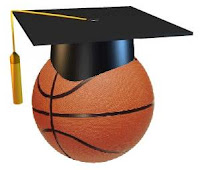 The constant push has been to hold down athletics as an extracurricular activity, and increase the role of academics. But to change the game, we need to go in the other direction and meld athletics with academics by establishing majors in athletics for student-athletes.

The arguments for athletics majors have been made many times before, but here is a quick summary:
But athletics majors also address many of the problems identified in Wolverton’s article and make all of his suggestions significantly easier.

If coaches are professors for their athletes, they are integrated into the faculty without needing to find them something to teach. If the bulk of a coach’s teaching responsibilities involve coaching the varsity team, the coaching profession will likely be less resistant to the change. Hopefully as athletically-related majors grow, coaches end up teaching a greater and greater percentage of non-athletes.

Despite the likely negative reaction of many of my faculty peers, I find Infante's argument compelling and worth further discussion.
Posted by Roger Pielke, Jr. at 7:01 AM