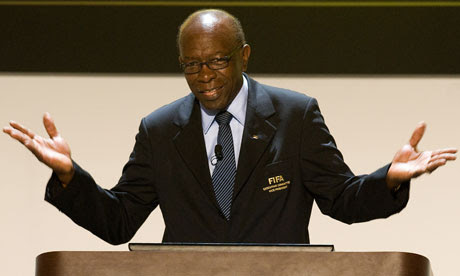 Explosive and troubling allegations out of Trinidad & Tobago:


Funds donated for earthquake-hit Haiti that never made it to the Caribbean island were paid into a bank account controlled by the former Fifa vice-president Jack Warner, the Trinidad & Tobago Football Federation (TTFF) claimed on Thursday.

Around £440,000 of emergency aid money has gone missing since it was donated two years ago and Fifa has frozen funding to the TTFF until it explains what has happened.

It is claimed the TTFF "surrendered their authority" to Warner, who resigned from football last year after being accused of bribery and he has refused to explain what happened to the money.

A TTFF statement said: "The TTFF acknowledges it is aware of funds made available by both Fifa and the Korean football federation for the football victims of Haiti's devastating earthquake in 2010.

"However, we are unable to confirm the quantum of funds received, as these monies did not go into the account used by the TTFF administration for its day-to-day operations, but instead to the TTFF's LOC (local organising committee) account as was requested by Mr Jack Warner, the former vice-president of Fifa and special adviser to the TTFF."

The situation puts FIFA in a bit of a spot -- will they demand financial accountability from the TTFF? If so, will FIFA then offer the same?
Posted by Roger Pielke, Jr. at 7:01 AM