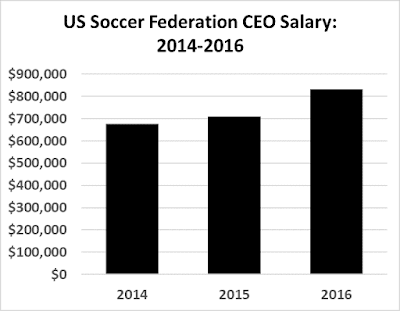 Update: In today's (27 Mar) Washington Post Sally Jenkins has a hard-hitting piece on executive pay in the U.S. Olympic organizations.

The graph above shows the total compensation of the CEO of the US Soccer Federation. The USSF is a non-profit registered as a charity in the state of New York. Here are the numbers and sources:

How does the USSF CEO salary compare to other non-profits based on the size of the organization?

In 2016 Charity Navigator looked at 2015 data on the salaries of CEOs at 4,587 charities from the IRS 990 submissions (report here in PDF). From this report graph of salary versus organizational expenses can be seen below. From the 2015 USSF IRS 990 we see that expenses were just over $110 million. Based on this data I have annotated the graph with a red star to indicate the data point that occurs at USSF expenses and CEO salary. 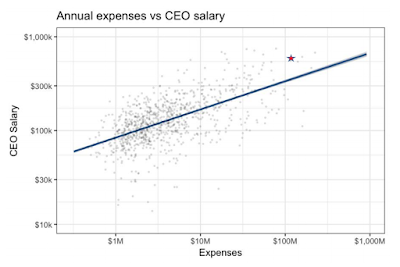 The USSF CEO is one of the highest paid chief executives of any non-profit in the United States. The Charity Navigator report notes: "66 charities paid their CEOs between $500,000 and $1 million" (and 10 paid more than $1 million). This would place the USSF CEO close to the 99th percentile of non-profit executive salaries.

In New York specifically, Steven Hall & Partners looked at all non-profit CEO salaries (in 2014, report here in PDF) for charities registered in New York, finding: "Among organizations with revenues greater than $40 million, median total compensation for the top executive was $458,140." The USSF CEO is again well above the median based on this survey.

Bottom line: The US Soccer Federation CEO is among the highest paid chief executives of any charitable, non-profit organizations in the United States.

Other sports NGBs:
Posted by Roger Pielke, Jr. at 2:12 PM