Last week the Court of Arbitration for Sport provided an update on its arbitration proceedings in Chand vs. CAS (here in PDF). This is the case that involves the IAAF testosterone regulations governing eligibility of female athletes. I won't go into the (substantial) backstory here, but if you are interested see my recent paper on "sex testing."

In this post I argue that CAS should not allow IAAF to re-write its regulations through this arbitration case.

This is an odd arbitration. Several years ago CAS had suspended the IAAF regulations with a request for IAAF to return with evidence in support of them (if this seems backwards, it is). IAAF commissioned research, presumably to support their regulations, which were published last year (Barmon and Garnier 2017).

The IAAF data do not support the IAAF regulations. Everyone seems to agree with this, as IAAF has asked CAS to present new regulations as part of the Chand proceedings. CAS agreed to this request and in response IAAF submitted to CAS "draft revised regulations that would only apply to female track events over distances of between 400 metres and one mile."

This is an unusual arbital decision. IAAF is engaged in regulation re-writing as part of a CAS proceeding.

Even more odd, the evidence from IAAF in Bermon and Garnier (2017) shows that as the 100m distance -- that Chand specializes in -- high testosterone women are slower than low testosterone women, shown in the figure below. 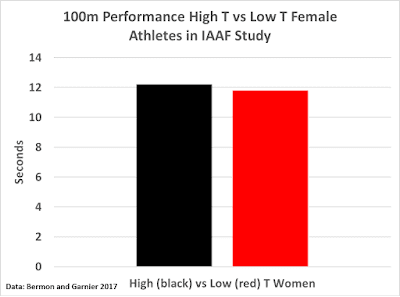 As a matter of the CAS arbitration in this case, that should be the end. Even if one were to privilege testosterone as a proper object of regulation of female athletes (which to be clear - I do not), the IAAF data does not support such regulation in the case of Chand. End of story. Case closed. Send IAAF back to the regulatory drawing board.

But for whatever reason (and I'm not sure, but I'd guess the reason's initials are CS), CAS is allowing IAAF to re-write its testosterone regulations via the Chand case. You've heard of "activist judges"? Well, these are "activist arbitrators" working on behalf of those in IAAF who have expressed a desire to ban certain women from sport.

But here as well the IAAF data of Bermon and Garnier (2017) don't support the proposed regulations of testosterone in women at distances of 400m to one mile. Consider the figure below: 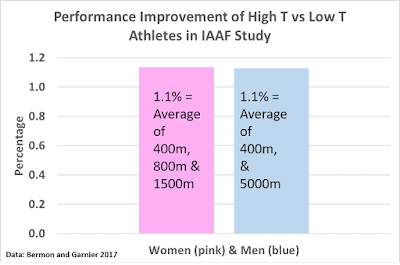 These IAAF data (pink bar) indicate that over distances of 400m, 800m and 1500m high testosterone women are on average 1.1% faster than their low testosterone counterparts. Unfair, IAAF might scream.

If IAAF responds that the T standard applies only to women but not men based on performance data, then this is the very hallmark of sex discrimination. This only scratches the surfaced of flawed T regulation (see my paper for more nails into this intellectual coffin).

Bottom line: CAS should not be engaged in regulatory re-writing via the Chand case. Chand should be permanently reinstated immediately. IAAF T regulations should remain voided. If IAAF wants to keep trying to regulate women's bodies, then they should start again.
Posted by Roger Pielke, Jr. at 6:57 AM