Anti-doping & governance: Time for athletes to take destiny into their own hands 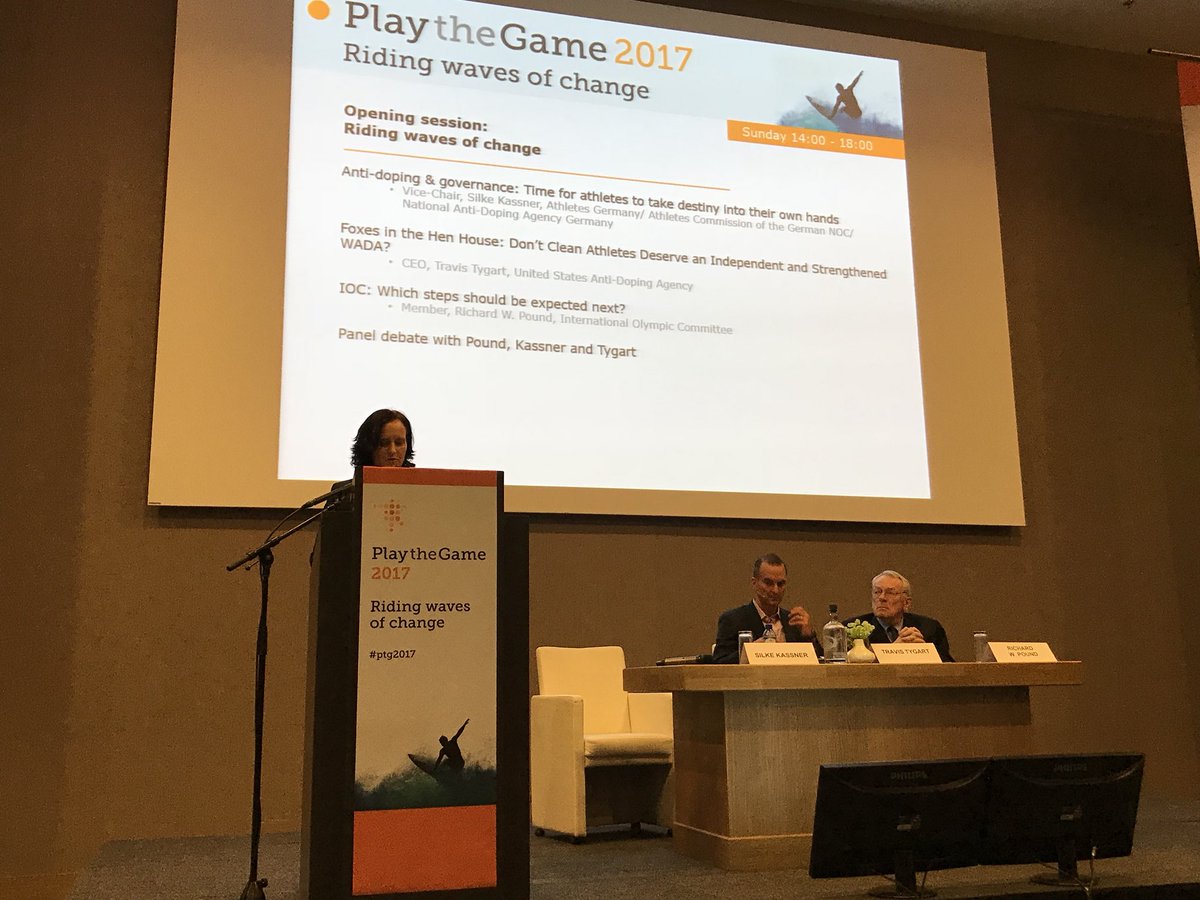 Yesterday at Play the Game 2017 I had the privilege of chairing the opening plenary panel that included Travis Tygart (USADA), Richard Pound (IOC) and Silke Kassner (vice-chair of the German Athletes Commission) -- seen above via @jensweinreich. During our discussion Dick Pound said of the leadership of international sports federations: "Nothing scares these old folks as much as athletes getting organised - so don’t [athletes] stop doing that."

Silke Kassner spoke exactly to this subject and her remarks should be read by all athletes and administrators. She has graciously allowed me to publish them here, lightly edited by me.

Anti-doping & governance: Time for athletes to take destiny into their own hands

We ‘Athletes’ are highly motivated to become one of the best in the world in our sport.

On our way to the international top level as a professional athlete, we accept many regulations of the sport structure and sport organisations.

As an athlete I accept and sign the World Anti-Doping Code. This enables me to compete on international level in my sport. Signing the code, I learn to be available – always - for irregular, unannounced doping controls.

I accept cuts into my personal freedom; always provide ADAMS with very private information to secure my whereabouts – all to be available at any time for unannounced doping control. It includes unpleasant procedures in giving blood and peeing in a small cup, pants to my knees, while being watched. In other live situations this would be highly inappropriate.

As athletes, we take the whole procedure into account because we permanently have to prove that our performance is clean. We struggle against a general suspicion day by day. We feel constantly pursued.

That makes the difference between the athlete and the official.

Three years ago, the world got to know about a state sponsored doping system in Russia - for sure, the greatest doping scandal in sport history.

As athletes representatives in Germany we followed up the entire McLaren Report, the independent Pound Commission results and the journalistic investigation. As German Athletes, we were really shocked and felt concerned about the health and the rights of the Russian athletes, who cannot be blamed in what system or country they were born.

The sports organisations, especially the IOC then were in the role to decide weather a Russian Team may compete or not at the Olympic Games in Rio. Among all research and evidence, the IOC decided not to exclude the Russians. Furthermore they called two commissions, to examine the given information about the Sochi Games.

This decision was based on that athletes couldn’t be blocked on a collective punishment but only by individual justice. And that’s it.

Reflecting this and the current step-by-step publications by the Oswald Commission, we understand that the IOC is keeping distance from applying the core principle of the WADA Code: the strict liability.

In the retrospective Russian athletes were not requested to be available for unannounced doping controls or any documentation of their testing by their Anti-Doping Organisation.

Until today it seemed that our general accepted & unique regulations to keep a doping free sport are not applied in Russia. But on the other hand athletes, NADOs and countries world wide, keep their daily sport & anti-doping business.

It is a fact that no one is talking about the strict liability and the reversal of evidence anymore. In view of:
We took initiative as German Athletes to approach the IOC with several statements and position papers – we even gave offer to speak in person.

Three years following the whole scene, we do not feel accepted by the IOC as the main stakeholders in sports. We don’t feel protected as athletes able to compete in clean competitions, we feel powerless and frustrated, unable to act and not being heard.

The WADA Code is the principle and the requirement to protect clean sports.

We want a worldwide binding regulation that provides international equality in the fight against doping. We want everybody and every institution that the rules are respected and applied.

Otherwise, we will shut down the strict liability, the WADA Code and close the WADA in Montreal.

If the application of the rules is not guaranteed, we close our national court of arbitration and the CAS as well and bring all the cases before our ordinary public courts.

Then all this is no longer needed.

But, these are all achievements that distinguish sport from other laws and rules. This all makes entirely sense to ensure a clean level playing field. It is – at present - without alternative.

Coming from this, German Athletes discussed the entire situation and the future in sports. We believe in the unifying power of sports. But the credibility of the sport is severely damaged and we lost confidence in the international sport system. We can see that the public is turning back from the organised sport and the Olympic movement.

The doping scandal, corruption affairs and the half-full audience during the Rio Games was a distraction from competition and the actual reason why athletes going to the Olympics. This all shakes our confidence in the values of the sports.

The structure is the problem. The entire construction of the sport system is a pyramid - the much broader bottom is the athlete, the protagonist of the competition. But, we are far away from decisions that affect us.

Today we conclude that many former decisions cannot be explained to an athlete. Because of that, we want to be significantly involved, demand more documentation and transparency in any decision making process that affects our lives and our sport.

For this, it is important that athletes stand in solidarity and represent their concerns professionally.

Therefore, the German Athletes and the Athletes Commission had the urge to empower the solidarity in founding an independent organization in Germany. That all happened today six weeks ago.

The new institution "Athleten Deutschland" / “Athletes Germany”:
We want no decision without the athlete!

We are
and we will grow step by step.

We no longer want to be a fig leaf in a statute or a insignificant minority in a board. As the central stakeholder in sport, we want to play the role we deserve. That's our right, according to democratic principles.

We encourage athletes worldwide to do the same – to show solidarity and to speak up for their rights.

We really thank Yulia & Vitaly Stepanov – they encouraged us, Richard McLaren for his work and investigations in Russia, Beckie Scott & WADA AC as well as the iNADO community for their leadership in anti-doping.

Thanks for your attention.
Posted by Roger Pielke, Jr. at 11:48 PM