Did the University of Washington Just Cover Up Research Misconduct?

The University of Washington has completed an investigation into the alleged effort by one of its medical school faculty to influence funding decisions by the National Institutes of Health that were based on donations by the NFL. The researcher, Richard Ellenbogen, is also the chair of the NFL's Head, Neck and Spine Committee. The UW investigation was prompted by an investigation by Democrats on the House Energy and Commerce Committee (here in PDF), released last May.

The NIH had awarded funds using the NFL donation to a group at Boston University, and a group that Ellenbogen was affiliated with had been ranked second. USA Today says of the UW investigation (emphasis added):

A University of Washington review committee has cleared Dr. Richard Ellenbogen, the pediatric neurosurgeon and co-chairman of the NFL’s Head, Neck and Spine Committee, who was harshly criticized in a congressional report in May over alleged attempts to influence a grant selection process.

In a letter to the UW medical school’s dean, members of the committee wrote they concluded Ellenbogen “did not attempt in any improper way to influence the selection or award process for the NIH (National Institutes of Health) research grant to be funded by the NFL” or violate any other ethical boundaries in advocating for additional funding.

ESPN has more details. The conclusion of the UW report is mistaken in important respects and is compromised by a clear institutional conflict of interest. This post explains.

The most important mistake is that Ellenbogen did indeed participate in trying to influence the "selection or award process." This is clearly documented in both the Democrats report and the Republicans request for an Inspector General investigation of the whole situation, sent to NIH earlier this week (here in PDF). That letter includes the following new information about a phone call between Ellenbogen and Dr. Walter Koroshetz, NIH official responsible for administering the grant process using the NFL's donated funds: 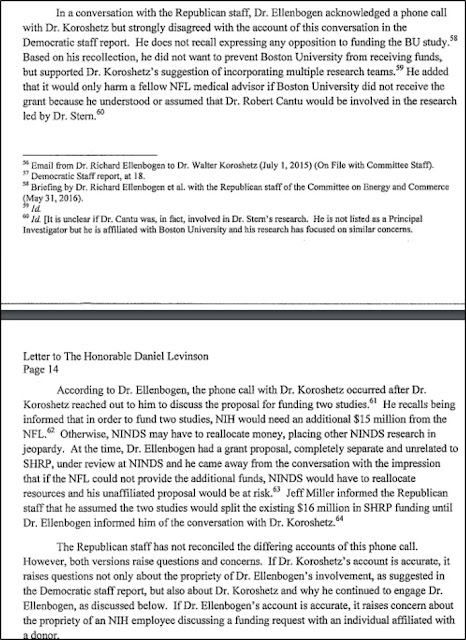 Much of the discussion of this issue has centered on whether or to what degree Ellebogen sought to redirect funds from BU to other awardees. In his defense, Ellenbogen argues that his role in the process was not to de-fund the opposing group, but to explore if more funds could be obtained from the NFL so that an additional group might be funded.

The BU part of the story has captured attention, but it is largely irrelevant to the issue of whether Ellenbogen acted improperly. Here is all you need to know:

That is it. The combination of the three elements above represent a prima facie case of an improper role in the NIH award process. Koroshetz, who apparently refused to speak with the UW investigators, is also guilty of violating protocol. He, apparently, was holding out the prospect of funding more research (to which Ellenbogen was a party) if an additional $15 million might be directed to his program.  Ellenbogen took charge of trying to get those funds. Think about that.

The conflicts and improprieties here are not rocket science. They are obvious.

It is hard not to think that the UW investigation was either a whitewash or simply conducted by those poorly informed about research integrity policies. The fact that it was conducted from within the UW medical school, which received millions of dollars from the NFL, and NFL-related funders, does not look very good.

There is plenty of culpability to go around here. The Republican letter requesting an IG investigation asked the right question: 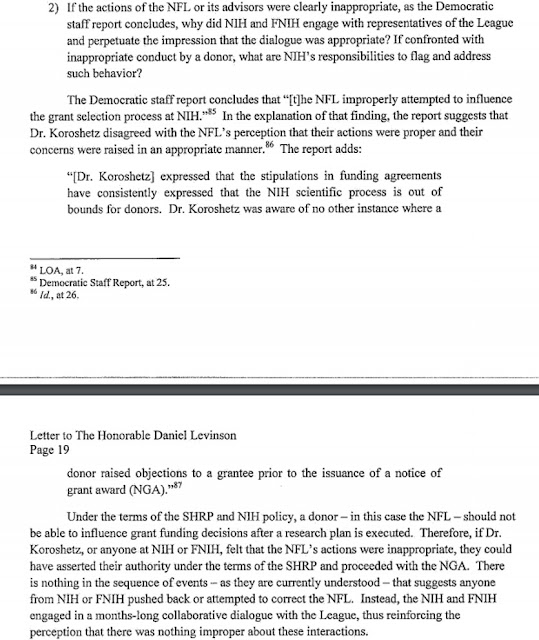 This whole situation is a mess, and the UW report makes it messier. The request for an NIH IG investigation makes good sense.