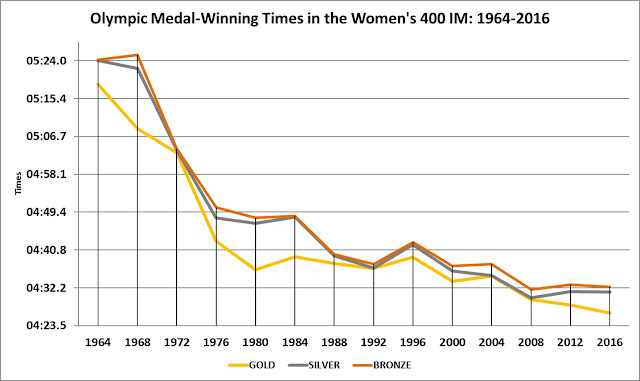 The graph above has been updated with the latest medal times. The version through 2012 also appears in The Edge.

After a big series of improved times by the, ahem, East Germans in the 1970s, there has been a steady decline in times since then. Better athletes? Better pool technology? Doping?  It is likely impossible to tease such factors apart.

One point worth highlighting: Since 2000 the men's world record for the 400IM has dropped by about 8 seconds and the women's by about 7 seconds. Whatever suspicions anyone wants to raise about the improvement in women's times, well they probably have to bring along the men as well.

The only change I'd make from my 2012 conclusion would be to rephrase it. Back then I said: "Did Ye Shiwen Dope? Evidence Says No." Today, I'd write: "Did Katinka Hosszú Dope? Evidence Does Not Say Yes." Such is sport in the 21st century.
Posted by Roger Pielke, Jr. at 8:51 AM