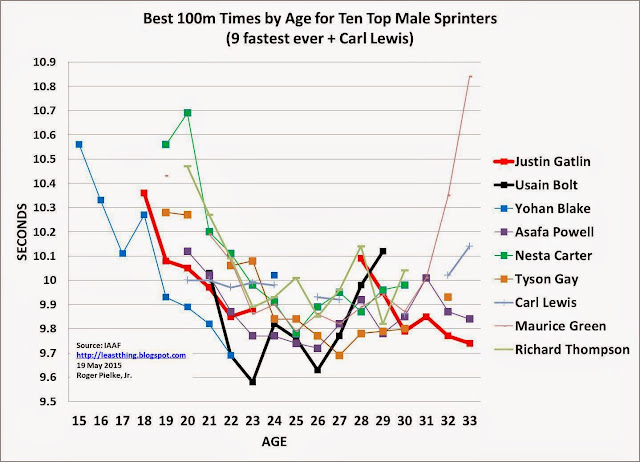 The graph above shows sprint times for 100m for 10 top sprinters, by age. The data comes from the IAAF (which hosts a fantastic array of easily accessed data). The sprinters include those with the 9 fastest times ever recorded (< 9.84 seconds) plus Carl Lewis. More sprinters could be easily added.

I was motivated to compile the data by this post today by Ross Tucker at his excellent Science of Sport blog. Tucker discusses the interesting case of Justin Gatlin the US sprinter who at age 33 is running faster than he ever did when younger. Gatlin's circumstances are interesting (right euphemism?) because he served a 4-year ban for doping from 2006 to 2010 for steroids. He is of course not the only athlete on this graph who has been punished for doping.


Since his return in 2010, he has run faster every single year, and claimed six of the seven fastest times in 2014.  He also had the two fastest 200m of the year, including a double at the Brussels Diamond league event where he ran 9.77s and 19.71s on the same evening.

Impressive stuff, and just what the sport needs – a challenger to Usain Bolt (and the other Jamaicans) as we build towards the Rio 2016 Olympics, and Bolt’s quest to claim a third sprint double.

Except, there’s that nagging, not insignificant doping problem around that challenger. Gatlin is the problem that will not go away. . . .  he is a former doper, dominating a historically doped event, while running faster than his previously doped self.

Motivated by Tucker's post I thought I'd look at some data.

In fact, none of these athletes ran a faster 100m after age 27 than they did at 27 or before (except Richard Thompson who ran faster at 29). Tucker points to a few athletes who had career bests in their 30s. Gatlin, of course, wasn't running (for time) at age 27 since he was serving a doping suspension. We can imagine all sorts of ways to connect the dots between the two red curves in the graph, consistent with a range of possible story lines. Here are a few:

We will be hearing more about Gatlin and doping to be sure.
Posted by Roger Pielke, Jr. at 12:59 PM