Payroll-Point Efficiency in the Bundesliga 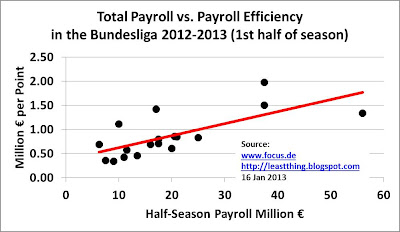 The figure above, courtesy of FOCUS and Sports Business Daily, shows a scatter plot of payroll versus point per million Euros payroll in the Bundesliga, halfway through the 2012-2013 season.

The data illustrate a steady decrease in payroll-point efficiency. The more a club pays its players the less efficient is that spending. The reason for this is that salaries increase non-linearly and points increase linearly.

The graph below shows that, in general, the core Soccernomics conclusion that more payroll means more points can be seen in these data as well. But there is a lot of spread in the data too, suggesting that payroll is not the entire story. 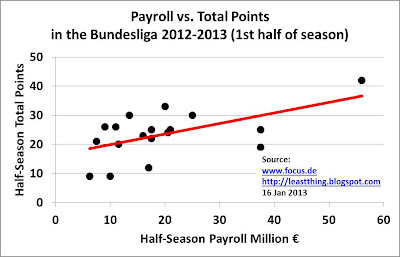 The graph below shows how payroll efficiency compares to points accrued so far this season. There is more than a hint of improved efficiency for better performing teams. There is also a significant spread in the data at all point levels. 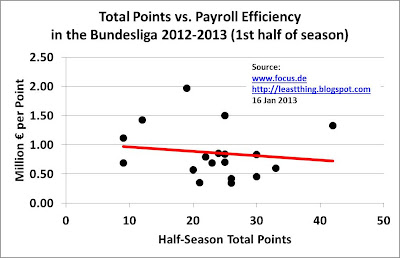 These data suggest that while more money means more success, at least in the Bundesliga for the first half of 2012-2013, there is a lot more going than pay checks which determine success in the league.
Posted by Roger Pielke, Jr. at 8:07 AM