A Review of Domestic Anti-Doping Legislation

A recent study by Barrie Houlihan and Borja Garcia of the University of Loughborough in the UK has surveyed UNESCO countries for the presence of anti-doping legislation governing sport (or PEDS, performance enhancing drugs).

They explain their focus (here in PDF) as follows:


The intention was to obtain responses from those in government directly responsible for ensuring their country’s compliance with its commitments under the terms of the UNESCO Convention Against Doping in Sport.

They only received responses for 55 of 153 UNESCO countries, of which 51 were substantive enough for analysis. That leaves about 100 UNESCO countries unsurveyed by this paper. More than 200 countries participated in the 2012 London Olympics. A summary of their findings appears in the table below. 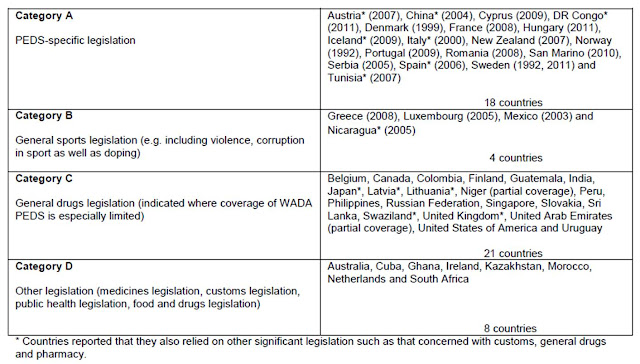 Only 18 countries have PEDS-specific legislation. An additional 25 have relevant, but not focused, legislation.

The US does not have PEDS-specific legislation, and the paper notes:


The United States, which has made considerable progress in tackling doping in sport in recent years, is a good example. PEDS trafficking falls under the remit of the Controlled Substances Act (CSA), but ‘there is not a comprehensive set of PEDS chemicals included within the purview of the CSA; rather, only those PEDS which have additional characteristics of abuse potential or health risk are listed under CSA’. While anabolic steroids, for example, are covered and traffickers can receive a prison term ‘many substances of concern for PEDS are not addressed under CSA scheduling’ and are unlikely to be addressed as ‘the criteria for inclusion of any particular substance under CSA and scheduling purview are distinct from their impact on performance-enhancement, per se’

Such reviews are incredibly important for mapping the policy terrain of sports governance, especially as greater integration and harmonization becomes important.

Reference: Barrie Houlihan and Borja García, 2012. The use of legislation in relation to controlling the production, movement, importation, distribution and supply of performance-enhancing drugs in sport (PEDS), Institute of Sport and Leisure Policy School of Sport, Exercise and Health Sciences, Loughborough University, Loughborough, UK. (PDF).
Posted by Roger Pielke, Jr. at 6:49 AM