Regulating Bribery in Sporting Events in the United States 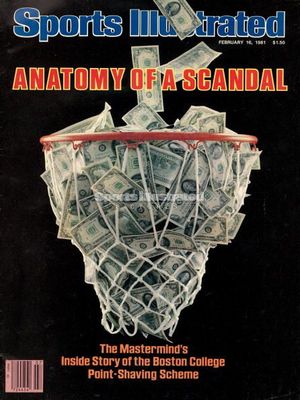 The corruption of sporting events via players or officials who are paid (or otherwise compensated) to influence results is in the news on both sides of the Atlantic. In Europe, much attention is being paid to match-fixing in football and in the US an allegation of point-shaving has surfaced involving the Auburn University basketball team. This post addresses some fundamental issues associated with the regulation of bribery in sporting events.

Is bribery in sporting events illegal?

Remarkably, according to a Council of Europe report released this week, "only ten countries in the world have passed legislation sanctioning sports frauds" (here in PDF).  That means that in the other 200-odd countries which participate and host sporting events, the regulation of bribery in sport is left to the sporting associations and other bodies which oversee the contests. This is another good example of the varied texture around the world of lex sportiva (the governance of sport by sport) and lex imperium (the governance of sport by governments). The United States does have federal legislation governing bribery in sport.

What does the US legal regulatory environment look like?

In the US, the federal government passed a law in 1979 called the "Bribery in Sporting Contests Act" who says the following:

The Act defines a "sporting contest" as:


[A]ny contest in any sport, between individual contestants or teams of contestants (without regard to the amateur or professional status of the contestants therein), the occurrence of which is publicly announced before its occurrence;

Because bribery in sport is often closely tied to illegal gambling, there is also related legislation in that domain (e.g., see this review in PDF). The relationships between the federal government and sporting associations in the regulation of bribery is -- as far as I can see -- murky, out of the public eye, and rarely discussed in the media and virtually absent in the scholarly literature.

How do sporting associations regulate bribery in the United States?

The US professional sporting leagues only address bribery in cursory fashion.  Here is what the National Football League says that no one associated with a team or the league may (here in PDF at p. 39):


Offer, agree, conspire, or attempt to illegally influence the outcome of the member or fail to suspend immediately any officer or player or other employee of the member who shall be proven guilty of offering, agreeing, conspiring, or attempting to influence the outcome of any game or be interested in any pool or wager of any game in which a member club participates;

Similar language can be found in the Major League Baseball constitution (not available to the public but here in PDF, though the MLB focuses on self-governance and not illegality). The National Basketball Association Constitution and Bylaws are not readily available (itself interesting). It does seem that the major professional sports are perfectly willing to outsource the bribery issue to federal officials.

The NCAA does have a rigorous and public set of policies and sanctions in place for bribery among college athletes (here in PDF):


A student-athlete who engages in activities designed to influence the outcome of an intercollegiate contest or in an effort to affect win-loss margins (i.e., "point shaving") or who solicite or accepts a bet or participates in any gambling activity through a bookmaker, a parlay card or any other method employed by organized gambling that involves wagering on the student-athlete's institution shall permanently lose all remaining regular-season and postseason eligibility in all sports.

Like much that the NCAA does, its attention seems focused on the behavior of the athletes, rather than the coaches or officials.

Sources for further info: here and here
Posted by Roger Pielke, Jr. at 9:39 AM