Talk at UF on "Sex Testing" in Sport 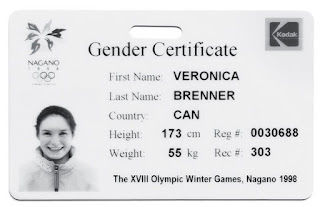 I gave a talk at the University of Florida earlier today on "sex testing" in international sport. I have attached the slides as a PDF here. The talk comes from The Edge, and is also the subject of a more technical discussion currently in late stages of peer review.

Foxes in the Henhouse Yesterday, the House Energy and Commerce Committee held a hearing on anti-doping that featured testimony of Olympians Adam Nelson and Michael Phelps. The hearing also included testimony of Travis Tygart, head of the US Anti-Doping Agency as well as representatives of the IOC and WADA,

Tygart argued for "a clear separation between those who promote sport and those who police it. To do so otherwise, we believe, is to encourage the fox to guard the henhouse" (PDF). Tygart, and others, are arguing for the IOC, and other organizations of the Olympic Movement, to recuse themselves from the administration of anti-doping regulations in sport. Such a fix, Tygart suggests is "easy."

Tygart is right about the fox in the hen house, but he is wrong about the fix being easy. This post goes into a bit of the institutional history behind IOC's tight grip on WADA to set the stage for discussions of how the fox might be excused from the hen house.

Earlier this week comments by officials at IOC and USOC illustrated the different incentives faced by anti-doping regulators and organizations of the Olympic Movement. For instance, a Russian IOC official commented on Tygart's passionate anti-doping agenda:


"Fighting with an organization responsible for giving future Olympic Games — it’s a big mistake. This gentleman [Tygart] is doing a very counterproductive job with respect to the Los Angeles [2024] bid."

The head of the USOC said of Tygart:


"Travis’s style, I would be lying if I told you it wasn’t having an impact [on the LA 2024 bid]. At the end of the day, he’s doing his job, and he’s doing it really well. Would we like him to be a little bit more of a silver-tongued devil? Yes, we would."

If you are new to the world of sport let me translate all that: These administrators of leading Olympic sports organizations would prefer that USADA tone down its efforts to improve anti-doping regulations and governance around the world. The reason for this is that anti-doping efforts can lead to scandal and a stain on sport and the organizations that govern it.

These dynamics are not new and can be traced to the origins of WADA in the late 1990s. At that time the IOC was reeling from a bribery scandal of its own making related and the world of sport had just suffered a big black eye due to doping revealing by the so-called Festina affair at the 1998 Tour de France.

Something had to be done.

So in response the IOC moved to create an "Olympic Movement Anti-Doping Agency," Right away many of those interested in anti-doping reforms saw this proposal to be highly problematic. General Barry McCaffery, who was President Bill Clinton's head of the Office of National Drug Control Policy with jurisdiction over matters related to sports doping, testified before the US Senate in 1999 on anti-doping reforms underway under the auspices of the IOC. He stated:

"IOC is rushing forward to build an institution that we cannot support-- one which is more public relations ploy than public policy solution. . . The proposal should have stronger guarantees that the agency  will be independent and operate based on basic principles of good  governance and democracy, such as transparency and no conflicts of interest."

Also testifying that day was Frank Shorter, US Olympian who had won a Gold Medal in the Marathon. He agreed:

"everything  possible should be done to avoid even the hint of a conflict of  interest. This obviously means no IOC control"

So too did Prof. Doriane Lambelet Coleman, of Duke University Law School:

"the reason it is so critical that the IOC and USOC  both externalize and make independent their drug testing operations is that they are neither willing nor capable, as a structural matter, of conceiving and administering a fair and effective drug testing program."

The pressure being put on IOC by the US and Europe meant that they had to give up their desire to own the new anti-doping agency. Instead, they had to settle for partial ownership.

Richard Pound, a Canadian lawyer and I.O.C. vice president, who is drafting a proposal on the agency to be considered by the conference on Thursday, acknowledged that the I.O.C. has had to scale back its plans to be at the center of the agency. Pound said national governments would have a much larger role than anticipated, a reflection of the widespread skepticism about the I.O.C.'s leadership ability in the wake of the burgeoning bribery scandals involving host cities. . . Pound said it was possible the new agency, if approved, would have as much as 50 percent representation from public authorities, whereas before the conference the I.O.C. had anticipated no more than 20 percent. It was an indication of the increasing inclination of governments to take anti­doping enforcement out of the hands of sports bodies . . .

Ultimately, it was a 50% split in governance responsibility between governments and sports organizations that came to characterize how WADA was run, and that split still exists today. In practice, however, it is fair to question how much of a role governments actually play in the oversight of WADA, Consider that the US government representative to WADA listed on its website today, Michael K. Gottlieb, left the US government in 2015. I do not recall any instance of a government official on the WADA Board speaking for the organization - it s always sports people.

There is nothing in the international treaty on anti-doping that dictates how WADA is to be governed. In practice, to change the composition of the WADA governing committee (its "Foundation Board") requires a super-majority of 2/3 votes of its 38 members. Currently on this committee  there are 19 members from the Olympic Movement including 5 IOC Members, one of whom is the WADA president. To remove the fox from the hen house would thus require many people from sports organizations to vote themselves out of a job at WADA. It is hard to envision how this might happen.

One consequence of the tight grip that the IOC (and its related organizations) have on WADA can sure be seen in how WADA implements sanctions for violations of its Code.  Consider the case of Russian athletes who were part of the institutionalized doping scandal revealed over the past several years. Below is a list of organizations and individuals culpable in the scandal as argued in the four recent WADA reports (by Pound & McLaren).
I have highlighted in RED where WADA has jurisdiction to sanction.

That is right -- WADA has no ability to sanction sports organizations of the Olympic Movement, as the WADA Code focuses almost exclusively on athletes caught doping, not corrupt organizations or people in them. This is why in the lead up to the Rio Olympics last year WADA sought to ban all Russian athletes from the games, but instead IOC delegated the task to each international federation to sort out, leading to ad hoc and arbitrary decisions.

Similarly, the fact that the IAAF leadership was extorting athletes for money to cover up positive doping tests is not a violation of the WADA Code -- if it were then the IAAF could be found non-compliant, and potentially suspended or otherwise sanctioned as a governing body for Athletics. Imagine that. Does anyone really think that sports organizations would willingly expose themselves to such oversight?

Getting the fox (IOC) out of the hen house (WADA) is thus no easy task. For its part the IOC responded to yesterday's hearing by stating that: "As for WADA’s governance, we hope to make it more independent from both sports organisations and governments."

Yet, it is not clear that IOC really understands what "independent" actually means in the context of governance (a failing not unique to IOC in the world of sports). Consider that IOC also says that it has "appointed independent experts for the WADA governance working group to give independent advice on how best to reform the governance of WADA." These "independent" experts are a lawyer for the IAAF and a CEO of a national sports federation, perhaps great guys but hardly independent of the Olympic Movement or the IOC.

The notion of getting the foxes out of the hen house this raises some important questions:
None of this is easy.  And this is just the governance structure -- I have not mentioned issues associated with the substance of the prohibited list, scientific integrity standards, athlete due process and participation and other important aspects of WADA reform.

Doping is endemic in elite sport. The organizations tasked with regulating doping aren't working. In fact, some sports organizations are working at cross-purposes to anti-doping. There is a lot of work to be done here.

Hanstad, D. V., Smith, A., & Waddington, I. (2008). The Establishment of the World Anti-Doping Agency A Study of the Management of Organizational Change and Unplanned Outcomes. International review for the sociology of sport, 43:227-249.